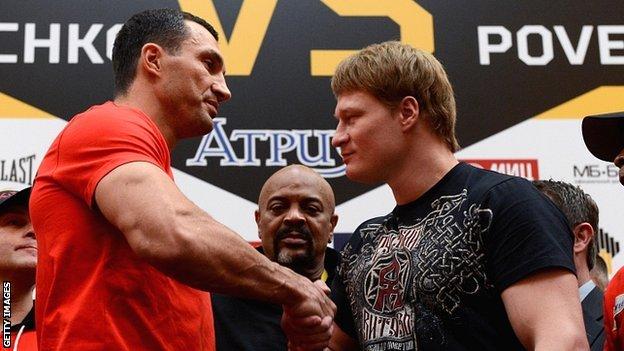 Haye, Chisora and another British prospect, Tyson Fury, will be ringside in the Olimpiyskiy Arena in Moscow.

"Barking dogs never bite and Povetkin is not a barking dog," said Klitschko.

"There is no controversy like with Haye, when he said all that crazy stuff before our fight. There's no spitting water or slapping like Chisora did before he fought my brother.

"Povetkin is a very respectful, calm and a very self-confident guy. I believe he will deliver a great performance."

The ringside presence of the three Britons will raise fears of a repeat of last year's melee between Haye and Chisora, who brawled at a press conference following Chisora's defeat by Vitali.

Former world champion Haye went on to beat Chisora, who has also been beaten by Fury, in the ring last July and their relationship has since thawed.

But there is no love lost between Haye and Fury, who were meant to fight in September before Haye suffered a cut eye, delaying the match until next February.

Ukrainian Klitschko, 37, is defending his IBF, WBO and WBA 'super' titles against his unbeaten Russian rival, who holds the WBA 'regular' belt.

Klitschko has not been beaten in 18 fights, since being knocked out by Lamon Brewster in Las Vegas in 2004.

But the 34-year-old Povetkin, a former world and Olympic amateur champion, is unbeaten in 26 professional bouts and should at least provide a test.

"He's the best opponent I've ever had," said Klitschko. "He has a great record, he is undefeated and I expect him to give everything he has."