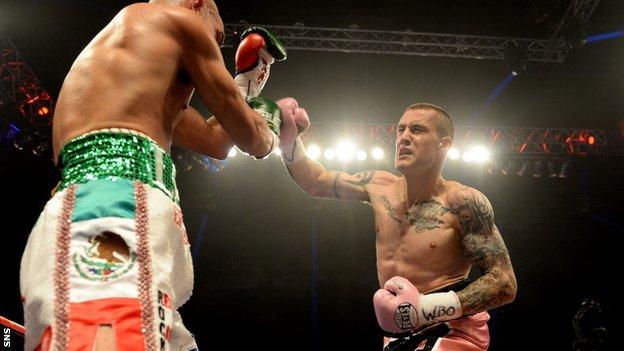 WBO lightweight champion Ricky Burns aims to fight again in February, with a rematch against Raymundo Beltran his preferred option.

The 30-year-old Scot suffered a broken jaw in last month's controversial draw with the Mexican in Glasgow.

"I think it's only right to fight Raymundo again," said Burns. "I think it's the fight the fans want to see."

Terence Crawford is the WBO's mandatory challenger, while a third option would be a unification fight.

I wouldn't say it crossed my mind that I would never fight again but I was thinking 'is the same thing going to reoccur?'

IBF champion Miguel Vazquez would be the likely opponent if Burns' camp went down that route.

The Scot's title defence at the SECC in Glasgow on 7 September ended with Beltran's manager saying this fighter had been robbed.

The challenger had the Coatbridge boxer on the floor in the eighth round.

Burns, evidently in pain as the fight progressed, was taken straight to hospital, where he underwent surgery to have a metal plate inserted into his jaw.

"My jaw is on the mend," Burns told BBC Scotland. "It's healing the way it should.

"I've been doing light training and hopefully I'll be back boxing in five to six weeks.

"Once I start sparring and the jaw has taken a couple of skelps, I'll be more confident with it."

Burns confessed to having doubts about his future in the immediate aftermath of his injury, which was sustained in the second round.

"I don't know how I managed to get through it," he said. "The pain was unbelievable.

"The surgeon said it was stupidity," he joked, before adding: "It's just the way I am. If I'm in a fight, I'll fight to the end.

"I think people knew that wasn't the real me in that ring. I was in survival mode from the second round.

"I wouldn't say it crossed my mind that I would never fight again but I was thinking 'is the same thing going to reoccur?'"

The much-hyped Crawford has won all of his 22 professional bouts and the American had no trouble beating Russian Andrey Klimov by a 10-round unanimous decision at the weekend.

A planned meeting between Burns and Vazquez in London was cancelled at short notice in March, with the Mexican IBF champion citing a viral infection.

Promoter Eddie Hearn said that he thought Beltran had done enough to win the last contest in "a close fight".

"I think he deserves his shot and, more importantly, Ricky wants to put the record straight," he said.

"The key now is the rehabilitation of Ricky Burns. We can't rush things. We really won't know until he is back in sparring, taking blows on that jaw again."