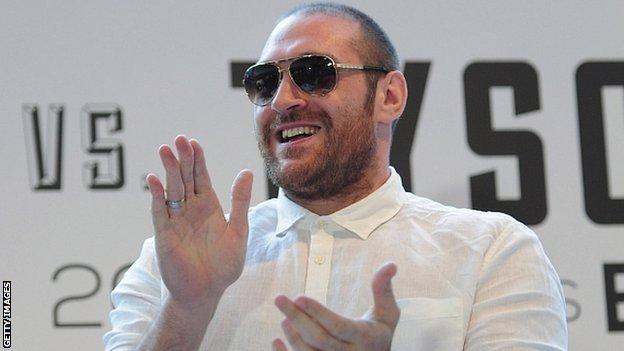 The heavyweight's British rival David Haye, with whom he is due to fight in February, was targeted, as were Lennox Lewis and Wladimir Klitschko.

"We're not very happy about it," said BBBofC general secretary Robert Smith. "We'll deal with it in our normal way."

Manchester's Fury, 25, was fined £3,000 in March for making homophobic tweets.

Smith told BBC Sport he was sent a transcript on Wednesday evening of the latest comments which appeared on Fury's account.

He said he had not yet discussed the matter with BBBofC stewards.

On Thursday morning the homophobic comments aimed at Britain's former world champion Lewis and current WBA, IBF and WBO title-holder Klitschko had been removed but other offensive tweets remained.

Both Lewis and Haye responded on Twitter, with Lewis posting a picture of his WBC belt and Haye questioning his rival's state of mind.

Smith added: "Tyson has been called before the Board before for making inappropriate comments and fined.

"I just can't understand how anyone would want to say anything like that at all - it's very disappointing."

Asked whether the comments did the sport of boxing any favours, Smith replied: "I don't think it does the human race any favours."

Fury, who is unbeaten in 21 professional fights, was to have fought Haye in September before his rival pulled out with an eye injury.