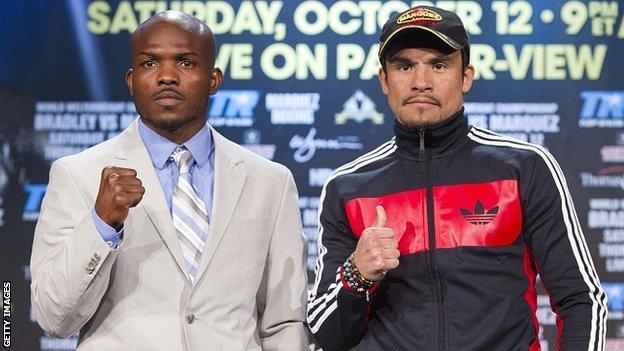 Juan Manuel Marquez is out to inflict the first defeat of Timothy Bradley's career when he challenges for the American's WBO welterweight title in Las Vegas on Saturday.

On the undercard, Orlando Cruz will attempt to become the first openly gay boxer to win a world title.

Two-time Olympic champion Vasyl Lomachenko makes his professional debut at the Thomas & Mack Center and could challenge the winner of Cruz-Salido in his second fight.

The winner of Marquez-Bradley could face another match with Pacquiao, who fights American Brandon Rios in Macau on 24 November.

Bradley, 30, beat Pacquiao on a controversial split decision in June 2012 before Marquez knocked out his arch rival in December.

"I feel very happy and I feel great, like a young fighter with a warrior heart."

Bradley boasts a record of 30(12)-0 and is coming off a punishing victory over Ruslan Provodnikov in March.

He absorbed a stream of punishment from his Russian opponent in the early rounds and was almost knocked in the 12th.

He will wear rainbow-coloured trunks in his fight against Salido to signal his support for the lesbian, gay, bisexual, and transgender movement.

Ukraine's Lomachenko, 25, wanted to challenge for a world title in his first pro fight but veteran promoter Bob Arum is confident he will fight for one in his second.

"If everything works out the way we hope, this kid will be the hottest thing in all of boxing," said Arum.

"I've seen some things I've never seen in my life. He could revolutionise the way things are done."

"I want to make history," said Lomachenko, who claims an amateur record of 396 wins and one defeat.

"I don't want to be just a regular great fighter. I want to be the best."