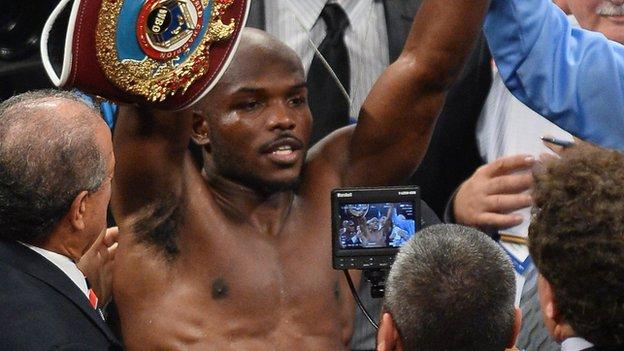 In a tactical bout, a late left hook from Bradley was one of few big shots.

On the undercard, Orlando Cruz failed in his bid to become the first openly gay world champion as he was stopped by Orlando Salido in the seventh round.

I've been robbed six times in my career. I clearly won the fight.

Salido, 32, regained the vacant WBO featherweight title after improving his career record to 40 wins (28 knockouts), 12 defeats and two losses, while Cruz slipped to 20-3-1, with 10 wins inside the distance.

Cruz, also 32, said: "I went into the corner and he hit me with a good shot. The fight was close until then."

Marquez, who had two narrow defeats and a draw against Filipino great Manny Pacquiao before a sixth-round knockout victory in their fourth fight in December, rocked Bradley in the ninth and felt he had done enough to win.

"I know I did my job and I'm happy with what I've done," he said, after his seventh defeat in 63 fights. "I landed the best shots... to win a fight it's not always necessary to win by KO."

Marquez, bidding to become the first Mexican to win world titles in five weight classes, added: "I've been robbed six times in my career. I clearly won the fight."

But Bradley, who beat Pacquiao - also on a split decision - in June 2012, said: "He couldn't touch me. I gave him a boxing lesson."

Unbeaten Bradley, who took his career record to 31(12)-0, could now face another match with 34-year-old Pacquiao, who fights American Brandon Rios in Macau on 24 November.

Two-time Olympic gold medallist Vasyl Lomachenko of Ukraine made an impressive professional debut with a fourth-round knock-out of Mexican featherweight Jose Ramirez in a scheduled 10-round bout.

Lomachenko, who won gold at the 2008 and 2012 Olympics, is contractually guaranteed a 126-pound world-title shot in his second fight which could be against Salido or WBA champion Nicholas Walters in the new year.