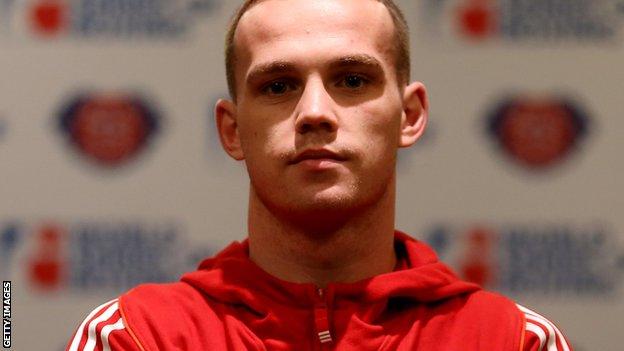 Bantamweight Sean McGoldrick has suffered a surprise defeat in the first round of the 56kg division at the World Championships in Kazakhstan.

McGoldrick lost on points to Venezuela's Yoni Pachecho, with all three judges scoring it 29-28 against the Welshman.

Pachecho was in impressive form to cause an upset against the 2010 Commonwealth gold medallist.

Andrew Selby is the next Welshman in action on Friday.

Wales' light-welterweight Zack Davies failed to reach round two in the 64kg category when he lost on points to home fighter Ermek Sakenov in Kazakhstan.

After a competitive first round, Davies upped the pace in the second and had the better of the exchanges.

Sakenov was judged to have had the better of the last, scoring 29-28 on all of the judges' cards.

Both men have been given first round byes in their competitions.

Evans and Selby have been selected as part of the 13-strong GB team along with Joe Cordina and McGoldrick.

Cordina was also given a bye in the men's lightweight 60kg and faces Cuba's Lazaro Estrada on Sunday.

Davies was one of two boxers selected by Wales from the GB Boxing Podium Potential squad.

The other one is light-flyweight Ashley Williams, who received a first round bye and now meets Sri Lanka's Muthukarage in the 46-49kg division on Saturday.