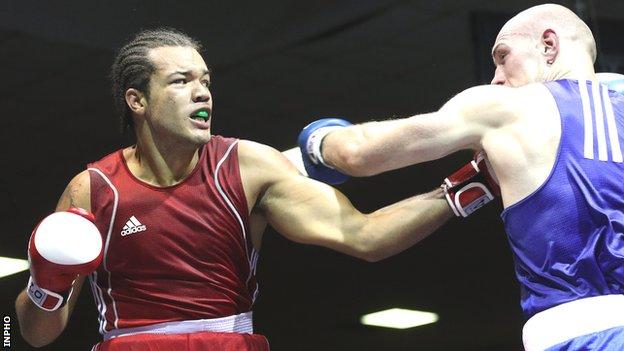 Tommy McCarthy has beaten Bulgaria's Nikolay Mutavski in his opening bout at the World Amateur Championships in Kazakhstan on Monday.

The Belfast heavyweight secured a unanimous decision over Mutavski and will now meet Canada's Samir El-Mais in the last 32 on Friday.

McCarthy is one of four Belfast boxers representing Ireland in Almaty.

Olympic bronze medalists Paddy Barnes and Michael Conlan are also in action this week along with Sean McComb.

Lightweight McComb takes on Israel's Almog Briga in the last 64 on Tuesday while Barnes faces Serbian Milos Baltic or China's Qingxian Mai on Friday for a place in the last 16 of the flyweight category.

Barnes and bantamweight Conlan, who also enters the fray at the last-32 stage against Hungary's Kriszthan Nagy or Helsham Abdelaal of Egypt on Saturday, are both seeded for the tournament.

Barnes is targeting a medal in his 'bogey' tournament, having already won Olympic, European and Commonwealth medals in a stellar amateur career.

"This seems to be my bogey tournament," admitted the flyweight.

"I'd be really happy with a medal because it's the only one I've never got, I think this is my year."

Barnes reached the quarter-finals of the World Championships in 2007 and wants a medal from these championships to complete his medal collection.

"You're always training for a gold medal, anything else and you're second best," added Barnes.

"But for me, I'd be really happy with a (World) medal. I think this is my year for a medal and, please God, gold."