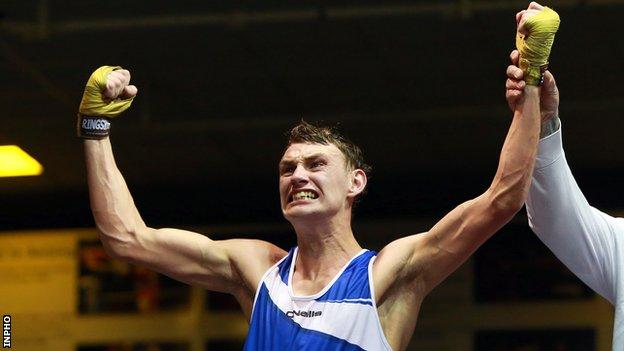 McComb earned a unanimous victory over Israel's Almog Briga to progress to the last 32 of his division.

The other Irish fighter in action on Tuesday, Ray Moylette also won.

However, former European champion Moylette had to work hard to beat Greece's Alexandros Tsanikidis on a split decision.

Light-welterweight Moylette was rocked by a big right hand by the Greek fighter early in the contest but the Mayo man regrouped to edge the victory.

On Monday, Belfast heavyweight Tommy McCarthy progressed to the last 32 of his division by earning an unanimous victory over Bulgaria's Nikolay Mutavski.

McCarthy will now meet Canada's Samir El-Mais in the last 32 on Friday.

Barnes faces Serbian Milos Baltic or China's Qingxian Mai on Friday for a place in the last 16 of the flyweight category.

Barnes and bantamweight Conlan, who also enters the fray at the last-32 stage against Hungary's Kriszthan Nagy or Helsham Abdelaal of Egypt on Saturday, are both seeded for the tournament.

Barnes is targeting a medal in his 'bogey' tournament, having already won Olympic, European and Commonwealth medals in a stellar amateur career.