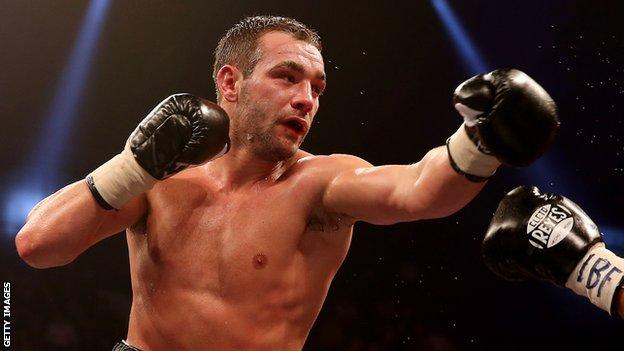 Colchester welterweight Lee Purdy will face Italian Leonard Bundu for the European title in a fight the Briton has called "make or break".

The 26-year-old was in May after his corner threw in the towel.

"I've fought one of the best fighters in the world and it would be a shame to come back down to British level," Purdy told BBC Essex.

"I want to fight top 10, top five fighters in the world now."

Purdy was a surprise call-up to face American Alexander when Sheffield's Kell Brook pulled out of the fight through injury.

With just four weeks of preparation, Purdy failed to make the weight, but the bout went ahead as a non-title encounter and he lasted seven rounds.

The former English, British and IBF International welterweight champion hopes to put himself back into the world title picture by overcoming 38-year-old Bundu at an as yet unconfirmed London venue.

But it will be a tough task against a champion currently rated number four in the world by the IBF.

"There's no excuses why I can't go for another world title next year.

"He's highly ranked, he's got the European title and he's unbeaten. It's my time now. This fight will make or break me."