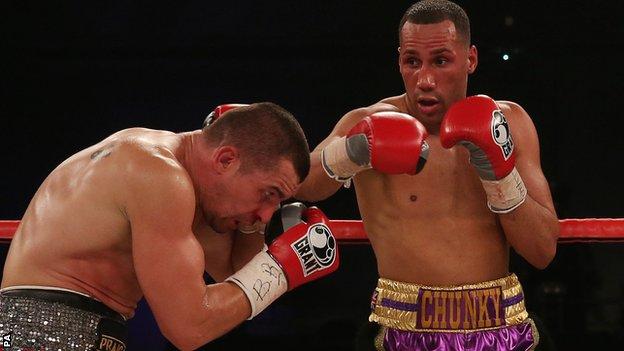 James DeGale believes a convincing victory against Dyah Davis will set him up for a world title shot in 2014.

The Beijing Olympics gold medallist will defend his WBC Silver super-middleweight title against the American at Glow, Bluewater, on 16 November.

Londoner DeGale, 27, said: "I'm in a very good position at the moment.

"I'm ranked highly by all the governing bodies and I'm hoping my promoter Mick Hennessy gets me a world title fight. I'm ready to step up and fight anyone."

Next month's bout will take place a week before DeGale's rival George Groves, who won a close points decision when they met in May 2011, challenges world champion Carl Froch in Manchester.

DeGale is eager to fight the winner of that all-British showdown, and WBO champion Robert Stieglitz and Sakio Bika, who holds the WBC title, have also been touted as possible future opponents.

Former North American Boxing Federation champion Davis, 32, was stopped in the 10th round by Bika last year, but has won 22 of his 26 contests.

"If I can do better against him than Bika did, it would make a statement and show I'm ready for a world title fight," said DeGale.

"He [Bika] has got the WBC world title and with me being the WBC Silver champion and currently ranked highly by them, it's maybe a fight that could happen.

"Then you've got Froch and Groves. I don't care which of those wins, I just want to keep doing my thing and hopefully fight the winner."

However, DeGale insisted he was not looking beyond Davis at this stage.

He added: "He's got a good pedigree and is someone I'll need to be sharp to beat. I think Davis will give me a real test, but what I want to do is go in there and look good against him."