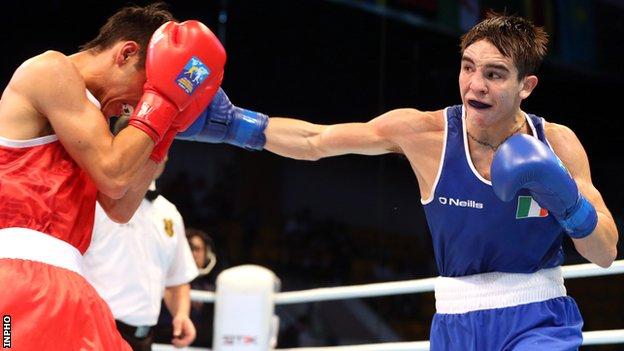 Belfast boxers Michael Conlan and Tommy McCarthy are both one victory away from earning medals at the World Amateur Championships after clinching wins in Kazakhstan on Monday.

Conlan took a unanimous win over Brian Gonzalez of Mexico in their bantamweight last-16 bout.

Olympic flyweight bronze medallist Conlan was awarded a 30-27 verdict by all three judges in Monday's bout in Almaty.

Conlan, who moved up from his Olympic weight of flyweight to bantamweight for the championships, will meet Russia's Vladimir Nikitin in the quarter-finals on Wednesday.

McCarthy needed to produce an impressive display to be handed 29-28, 29-28, 29-28 win in his bout with the seventh-seeded Germany and will face highly-rated Argentine Yamil Peralta in the quarter-finals on Wednesday.

Middleweight Quigley took a 30-27, 30-27 and 29-28 verdict over Scottish fighter Brown which sets up a last-eight meeting with Hungarian Zoltan Harsca.

Belfast fighters Paddy Barnes and Sean McComb will both be involved in last-16 bouts on Tuesday.

Barnes will face Kenya's Simon Nzioki in the flyweight division while lightweight McComb will take on Azerbaijan's Elvin Isayev.