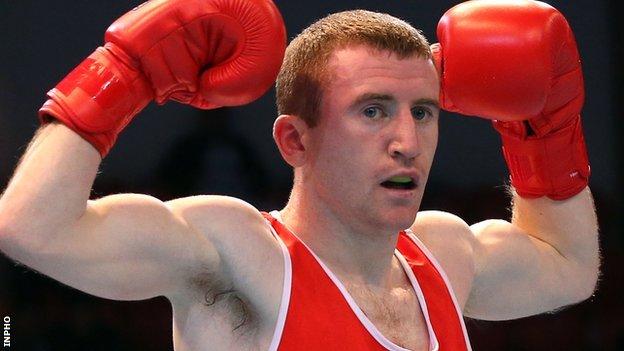 Belfast flyweight Paddy Barnes progressed to the quarter-finals of the World Amateur Championships by beating Kenya's Simon Zzioki on Tuesday.

Barnes stopped his opponent in the first minute of the first round in Kazakhstan and will fight again in his last eight bout on Wednesday.

Sean McComb failed in his bid to make the quarter-finals after suffering a split decision defeat at lightweight.

McComb had secured his place in the last 16 with a dominant display against Gildas Bangana in Kazakhstan on Sunday, and was awarded the opening round against Isayev.

However he subsequently struggled to keep his Azerbaijan opponent at bay, and narrowly lost the second round before all three judges awarded the third round 30-27 to Isayev.

"I'm sad of course but I enjoyed the experience a lot," said McComb.

Michael Conlan and Tommy McCarthy are already through to the quarter-finals, which will all take place on Wednesday, with the semi-finals on Friday and the finals on Saturday.

Conlan, who is seeded two, will take on Vladimir Nikitin from Russia, while McCarthy fights Argentinian Yamil Peralta.

Donegal's Jason Quigley is also one victory away from a medal after winning his middleweight last-16 bout on Tuesday.