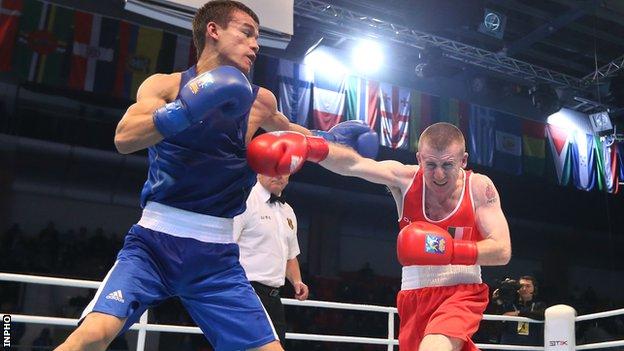 Paddy Barnes, Michael Conlan and Tommy McCarthy have failed to secure a medal at the World Amateur Championships after quarter-final defeats.

Barnes and Conlan went down to unanimous decisions to miss out on the semi-finals and a guaranteed medal.

European champion Quigley eased to a unanimous 30-27, 30-27, 30-7 middleweight success over Zoltan Harsca of Hungary and goes through to Friday's semi-finals.

Westmeath man Ward's light-heavyweight quarter-final with number three seed Nitika Ivanov was stopped late in the first round after the Russia had suffered a badly cut eye.

Fighting with no head gear is good but to fight six times in 10 days without it, is impossible

The Moate fighter was due a bit of good fortune after missing out on last year's Olympic Games following a hugely controversial qualifying defeat in Turkey and then suffering a freak leg injury during the European Championship in June.

Both boxers received a warning in the second round for use of the head, while the World Championships remains the only major tournament in which Barnes has not won a medal.

Barnes gestured his unhappiness with Latipov's use of the head throughout the contest and said that the absence of headguards had contributed to his defeat.

"Was out on my feet in the first round and didn't recover. Blurred vision for three round with head clashes," Barnes said on Twitter.

"Fighting with no head gear is good but to fight six times in 10 days without it, is impossible."

Conlan, also an Olympic bronze medallist, lost 27-30 28-29, 27-30 to Nikitin but believes he will improve after his move up to the bantamweight category.

"I fought the strongest boxer in the weight and a year from now I know I will be stronger," said Conlan.

"I thought I won the first round. I was getting through with shots. But the result just didn't go my way."

"It was a close fight, but I cannot change it so there's no point crying about it," said McCarthy.

"He caught me with a couple of good ones. There are no positives to be taken in losing."