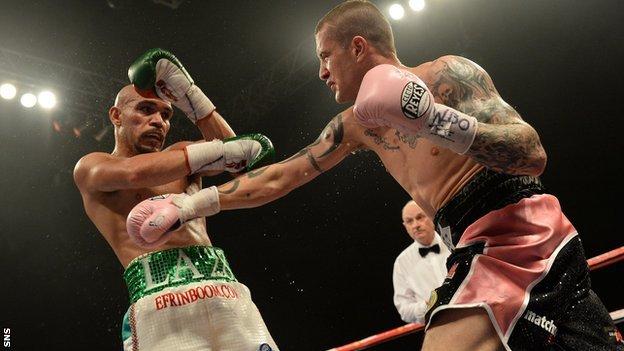 Ricky Burns is "99%" certain to make a February return against the man who broke his jaw, according to the WBO world lightweight champion's manager.

Alex Morrison says a deal is all but done for Mexico's Raymundo Beltran to return to Glasgow for a rematch.

Their first meeting ended in a controversial draw last month, with the Beltran camp saying the decision "robbed" their man of the title.

It emerged afterwards that Burns had broken his jaw during the fight.

The injury was described at the time as "career threatening" by promoter Eddie Hearn.

The Coatbridge fighter subsequently had steel plates inserted into his face to repair the damage.

Burns returned to light training earlier this month and now Morrison says his fighter is keen to do the right thing.

"Ricky feels it's the moral thing to do in giving Beltran another shot," Morrison told BBC Scotland.

"He wants to put the record straight after fighting for 10 rounds with a broken jaw in that first fight.

"We want it. Beltran wants it and the fans want it. The deal is done. We're 99% there with it and are just waiting for the final confirmation which will happen any day now.