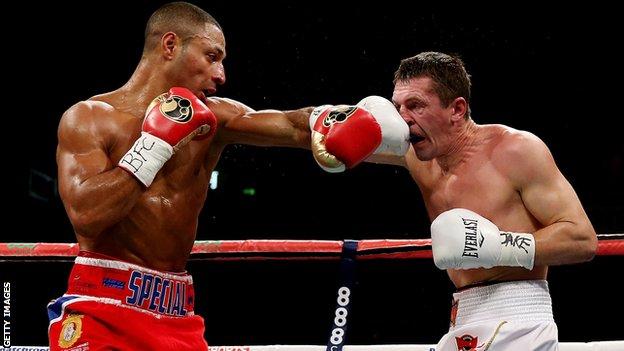 Kell Brook knocked out Vyacheslav Senchenko in the fourth round at Sheffield's Motorpoint Arena to earn a shot at the IBF welterweight title.

Home fighter Brook, 27, floored his opponent in the third and the game Senchenko did well to last the round.

Senchenko wobbled Brook in the fourth before the Brit ended the fight with a fine left-right combination.

Brook's victory was revenge of sorts, Senchenko having battered Ricky Hatton back into retirement last November.

"I believe I've made a statement here," Brook told Sky Sports. "When I hurt him I knew I could take my time.

"I nearly got lackadaisical and I got caught myself, but I thought 'I'm going to get you back for that'.

"I wasn't really hurt, it was just a bit of a buzz. I'm glad to have got revenge for Ricky."

Devon Alexander is the IBF title-holder and he will defend his title against fellow American Shawn Porter on 30 November.

Brook is mandated to meet the winner of that fight within 90 days of it taking place.

Saturday's fight was the second time Brook has engaged in a world title eliminator following his defeat of Hector Saldivia last October.

But ankle and foot injuries to Brook and a biceps injury to Alexander scuppered the Englishman's world title ambitions.

Brook took out his frustrations on Carson Jones in July, stopping the American in a rematch, and he should finally get his shot at the big time in spring 2014.

The opening exchanges between Brook and Senchenko were cagey but the Englishman got through with two chopping right hands just before the end of the second round - a sign of things to come.

Brook wobbled the 36-year-old Senchenko with a right cross early in the third before flooring him with another and following up with a juddering uppercut.

Brook appeared to be in complete control but Senchenko demonstrated tremendous spirit, stiffening his rival with a big right midway through the fourth.

However, Senchenko was staggered by another right before Brook delivered the coup de grace, a razor-sharp left-right combination that sent Senchenko sprawling.

Senchenko made it to his feet but the referee wisely decided to wave the fight off. Brook is now unbeaten in 31 professional fights, with 21 knockouts.

Former world champion Khan was scheduled to meet Alexander on 7 December but the fight fell through, amid rumours Khan will instead remain in the gym and challenge American legend Floyd Mayweather next May.