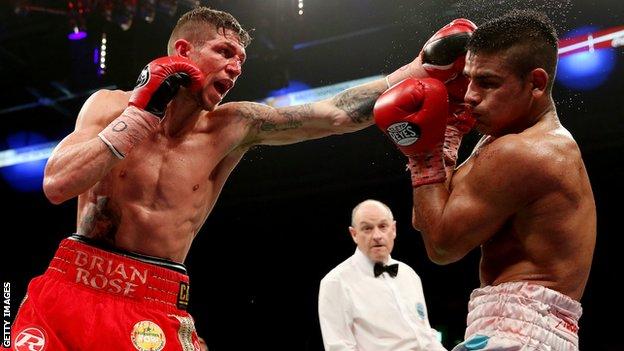 Smith, 23, dominated the centre of the ring in Sheffield, showing explosive power to register the seventh stoppage of his nine-fight career.

Argentine Acosta, who had lost eight times in 40 previous outings, was knocked down in the sixth round.

Smith finished his opponent shortly after with a right hook to the body.

Rose's fight was chief support to Kell Brook's victory over Vyacheslav Senchenko and it was the most controversial engagement of the evening.

The Englishman suffered a cut to the bridge of his nose as Maciel appeared to have the better of the early rounds, landing with uppercuts with unerring regularity.

Rose withstood a fearsome barrage in the eighth and arguably had the better of some gruelling exchanges down the stretch as his opponent tired.

However, the 29-year-old Maciel, a former challenger for the WBO middleweight crown, looked to have done enough to at least earn a draw.

The announcement of Spanish judge Fernando Laguna's card, which had Rose winning 117-111, was greeted by disgruntled murmurs.

And the boos that greeted the announcement of Rose's victory were particularly telling, given that he was fighting on home soil.

The vacant WBO belt is contested by Demetrius Andrade and Vanes Martirosyan in Texas on 9 November.

Joshua made short work of Italian Emanuele Leo on his pro debut earlier this month and his second paid fight was equally one-sided.

Butlin, 37, demonstrated a big heart to make it through the first round but caved under a crunching right hand in round two.

The game Butlin, his left eye gushing blood, clambered to his feet but the referee called a halt to proceedings 50 seconds into the round.

It was also a satisfactory night's work for Beijing Olympian Kal Yafai, 24, who boosted his perfect record to nine victories with a points win over Spain's Santiago Bustos.