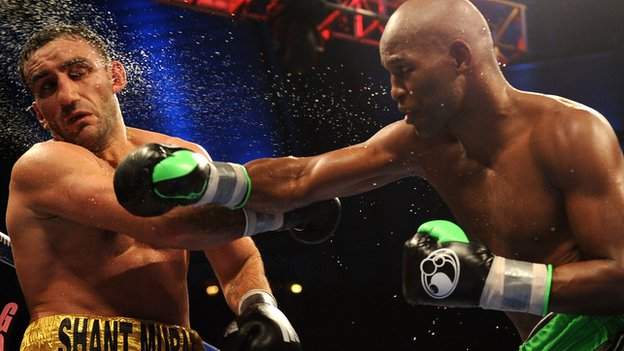 Hopkins, 48, started slowly but hurt his 30-year-old opponent in the seventh round in Atlantic City.

Defeat to compatriot Chad Dawson in 2012 saw Hopkins lose his WBC light-heavyweight title, but a unanimous points victory over Tavoris Cloud in New York six months later broke his own previous record as the oldest champion in boxing history.

Murat, whose only previous loss in 24 fights came against Welshman Nathan Cleverly, failed to build on a solid start against Hopkins at the Boardwalk Hall.

A solid left hand by Murat in the third round served as a warning for Hopkins, who drew roars from the crowd in the fifth when he appeared to kiss his opponent on the neck during a clinch.

Murat, fighting in the United States for the first time, was warned for punching the champion after a slip in the sixth and was visibly hurt in the seventh after a flurry from Hopkins.

Now in full control, Philadelphia fighter Hopkins cut the Armenian-born Murat in the eighth, before closing out a comfortable points victory with another damaging right hand in the final round.