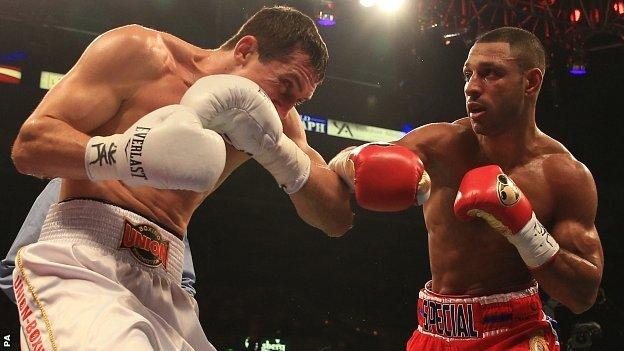 Kell Brook is targeting some of the biggest names in the welterweight division following his defeat of Vyacheslav Senchenko on Saturday.

"I've arrived and I want the massive fights," said the 27-year-old Brook.

"We have history with Devon, the Khan talk has been going on a while and Broner thinks he's something he isn't."

Prior to Saturday's fight at Sheffield's Motorpoint Arena, Senchenko had been beaten once as a professional, on a cut against Paulie Malignaggi last April.

But the 36-year-old was unable to withstand Brook's power, visiting the canvas in the third and the fourth rounds before the referee called the fight off.

The bout was billed as a final eliminator for Alexander's IBF title but the unbeaten Brook sounded happy to take another route following his 31st professional victory.

"I want [WBA title-holder] Broner, I want Khan - I don't want to leave boxing without being in with the top guys in my division," he said.

"It has to be my best win. I made a statement. Senchenko is a former world champion with a great pedigree and no-one has done that to him.

"I'm a force to be reckoned with. After that performance I belong at the top level."

He was meant to challenge Alexander in 2013 but ankle and foot injuries to Brook and a biceps injury to the champion scuppered the Englishman's world title ambitions on three occasions.

Alexander will defend his title against fellow American Shawn Porter on 30 November, with Brook mandated to meet the winner of that fight within 90 days of it taking place.