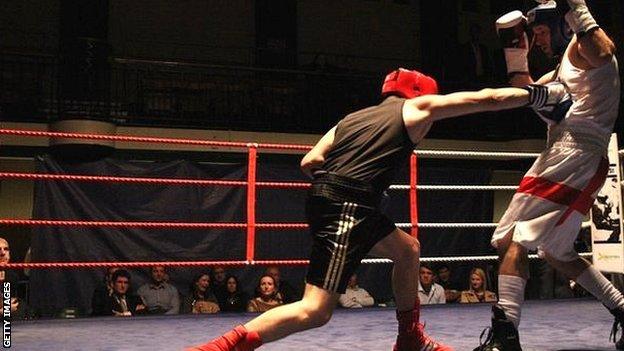 The British Boxing Board of Control thinks they are "mad", and the Amateur Boxing Association of England "wouldn't recommend it", but Mike Keen and Richard Sharp have never felt so alive.

Keen is a trader for an Australian bank, while Sharp works in a German bank's strategy team. Long hours, good money: they are suited-and-booted workers in London's financial services factory.

"For the last week I've become very aware of my body - I've felt every little ache and strain," says Keen.

"And I can tell you everything about the walk to the venue. I noticed absolutely everything."

Sharp adds: "Without meaning to be cliched about it, I see the same things on the train in every morning, but it felt different today."

This heightening of the senses is something Jamie Toff has witnessed hundreds of times before, as well as experiencing it himself.

A government bonds trader, Toff was looking for a way to relieve the stress of his day job and keep fit. He thought kick-boxing might do it until he saw a group of City workers training to be boxers at a gym in east London.

"I had never heard of white-collar boxing," says Toff. "But there was a spirit of togetherness. There were blokes from banks, trading houses, insurance companies…there was even a composer.

"I ended up having 18 bouts, including one at [West Ham's] Upton Park. There aren't many sports that can give normal blokes an experience like that."

Toff does not box competitively anymore. He is too busy training would-be warriors and promoting his own nights. The "Brawl in the Hall" is one of his, and he has helped Keen and Sharp prepare for their baptism of blows.

Sharp, a former Marine, fights Nathan "Dynamic" Roberts in the fourth of the evening's eight bouts, while Keen must battle his butterflies until the seventh contest. His opponent is Daryl "Mid-Life Crisis" Thorpe, who coincidentally was two years below him at school.

Some might argue that Thorpe's nickname could be applied to any of the 16 fighters on the card. A mid-life crisis used to mean buying a pair of trousers that are too fashionable for the wearer, or doing "something different" with your hair. Wealthier 30-somethings might have bought a motorbike, and the truly reckless would flirt with the girl in accounts.

But somewhere along the line it became mandatory for middle-aged men (and some women) to assert their undiminished vigour by taking on an extreme challenge: run a marathon, climb Kilimanjaro, swim the Channel, that kind of thing.

There has clearly been an element of inflation at play here - a concept that City workers should be comfortable with - because fighting a stranger in front of 400 spectators is what you do when a triathlon simply won't cut it.

We don't want anything to do with it

The 1999 film "Fight Club" is the obvious reference point, but the white-collar scene is not secret, does not look like mass therapy and nobody has quit their job. It is very popular, though.

Speak to anybody involved in British boxing and they will tell you white-collar boxing is growing fast. They just do not know how fast.

Unlicensed does not mean illegal - all of these promotions are above board, and many are run in aid of charity. But that doesn't placate the boxing authorities.

"We think it's mad," is Robert Smith's forthright view of the grassroots phenomenon.

Smith is the general secretary of the British Boxing Board of Control (BBBC), the UK's governing body for professional boxing.

"Boxing is fun and boxers are some of the fittest athletes anywhere. But you cannot get away from the fact that it can be dangerous," he continues.

"I haven't been to any white-collar nights myself, but I have seen footage of James Cracknell getting knocked out."

That is a reference to the Olympic rowing champion's emphatic defeat by New Zealand cricketer Kerry Walmsley in an unlicensed contest in 2007. Walmsley was almost two stones heavier than Cracknell, and enjoyed a considerable reach advantage.

The charity involved that night was Sparks, and the sight of one of its most famous patrons sparked out on the canvas prompted it to withdraw from all future boxing fundraisers.

"You can't take part in a contest after just a few months of training. We don't want anything to do with it," is Smith's final word on the matter.

But white-collar boxers have no intention of going professional. They can earn a lot more trading pork bellies and cornering the market for frozen orange juice. They keep in shape and they take their training seriously, but basically they just want to lace on some gloves and hit somebody for fun. Is that so wrong?

"We don't recommend it," says Keith Walters, the chairman of the Amateur Boxing Association of England (ABAE).

"It's a physical sport: you've got to be looked after. To be honest, it's not a sport I'd recommend to everybody.

Walters points out that the ABAE has listened to the market by raising the upper age-limit for amateur boxers from 34 to 40 with its new Masters division. That would still be too low, though, for Keen and at least one other fighter on the "Brawl in the Hall" card.

"With the pros and us, we've got a good structure. So this unlicensed fighting worries me a bit," adds Walters.

It almost goes without saying that the BBBC and the ABAE ban any of their coaches, fighters or officials from participating in white-collar events.

"The board of control hate it - hate it with a vengeance," says ring announcer Steve Holdsworth, who has been involved with the sport as a fighter, journalist and commentator for 40 years.

"I used to hold every licence you could possibly hold, but then the BBBC found out I was involved in a show like this and told me I couldn't do both. I said you can keep your licence.

"This scene is getting huge. I do half a dozen shows a month. When I was a BBBC licence-holder as an MC I did two shows in three years.

"The BBBC is very worried about this and rightly so. So are the amateurs.

"They've brought in Masters boxing because of this, but these guys don't want to do that. They want to have a bit of a laugh, and it's all for a great cause."

For most of the night in Bethnal Green it is hard to argue with Holdsworth's upbeat assessment, particularly as most of the boxers are raising money for their own causes, and £5 from every ticket is going to the promoter's designated charity, William's Fund.

Safety is clearly taken seriously too - though participants must sign a personal injury waiver. The fighters are wearing 16oz gloves (the well-padded gloves the pros use for sparring) and head guards. They are not divided into weight categories, but Toff has used his experience to avoid mismatches, and there is an experienced referee in the middle, a doctor at ringside and an ambulance outside.

Sharp wins his bout against the more experienced Roberts, and is soon enjoying his friends' praise in the bar, which is doing a lively trade.

And then Des "Boom Boom" O'Connor is knocked out by financial adviser Guy "Old Man" Bolam. O'Connor is up again pretty quickly but the referee has already stopped the fight.

"The crowd wants to see knockouts; we don't," says Toft, who ends the night trying to persuade a slightly embarrassed O'Connor to get checked out at hospital.

He could, of course, have got a concussion playing rugby or falling off a ladder. But he didn't, and for the first time all evening we were reminded that boxing hurts.

"The majority of the time I sit here doing nothing," says Dr Yousef Rashid, a GP who has also worked as a ringside doctor for 20 years.

The occasional concussion, broken nose or dislocated shoulder are the most serious injuries he has had to deal with and, like Holdsworth, he has little time for the authorities' hand-wringing.

"They think that anything that isn't sanctioned by them is a sideshow," says Rashid.

"But how can the board limit the work I do? I'm an independent contractor. It's completely unreasonable."

Keen, meanwhile, is waiting to make his way to the ring. His fight follows the abridged O'Connor-Bolam bout.

"I remember very little about that walk, or the fight," he says later.

"But in the shower afterwards I was in pieces. All the emotions of the last week just came pouring out. It was over."

After a close first round, Keen's younger, fitter, more experienced opponent rained punches on him for most of the second round. It was to his credit that he pulled himself together in the final two-minute round. It was defeat, but with honour.

There is a scene in "Fight Club" where Brad Pitt's character Tyler Durden looks at the crowd who have turned up at the latest clandestine meeting and says, "I see a lot of new faces…shut up! It means a lot of you have been breaking the first two rules of Fight Club."

Judging from the animated chatter in York Hall's bar, white-collar boxing will continue to enjoy word-of-mouth marketing, too: no matter how hard the authorities try to ignore it.