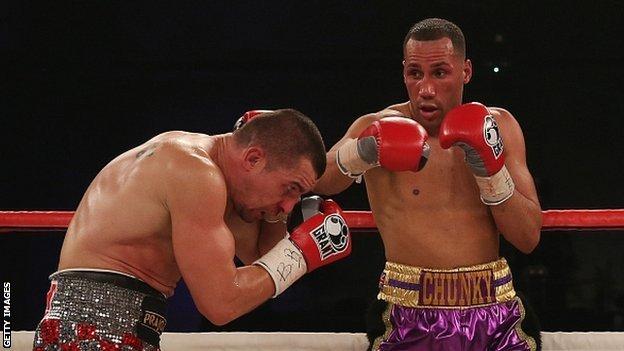 DeGale's 18th professional fight will be against American Dyah Davis in Kent on Saturday.

"I don't want to tread water, I need to box for a world title in my next two fights after this one," super-middleweight DeGale told BBC Sport.

"Mick has promised he's going to deliver and it's his job to deliver. No pressure, Mick, but it's up to you."

DeGale won middleweight gold at the 2008 Olympics but his pro career took a turn for the worse when he was beaten by bitter domestic rival George Groves in 2011.

However, DeGale has won his last six fights and will have a keen interest in Groves' world-title challenge against Nottingham's super-middleweight king Carl Froch on 23 November.

"Maybe I'll fight the winner of Froch-Groves, if they want it. I'm not sure they'd fight me because I'm too risky, but you never know.

"I'd like to box Groves again and get revenge but there are a lot of different ways I can go.

"I'm ranked high by all of the governing bodies. But I'm the WBC's 'silver' champion, so that would be the most obvious route."

The WBC's full champion is Australian Sakio Bika, who stopped Davis when they fought last June and was outpointed by Welsh legend Joe Calzaghe in 2006.