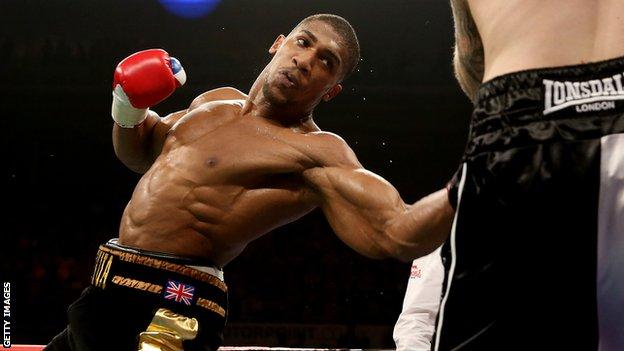 "The plan is to box him every month for the next year and get him 10 or 12 wins under his belt."

We have got a real chance in Anthony Joshua to have another heavyweight world champion from these shores. He is a machine of a man

Hearn added: "Then we will try and pick up that British title.

"It is a busy period for him but he is looking the real deal already."

Joshua won gold in the super-heavyweight category at the London Olympics and turned professional this summer, joining Hearn's Matchroom stable.

The Watford-born boxer has set his sights on a world title fight within four years.

"He is a machine of a man," Hearn declared.

"He is 6 foot 6 inches, just under 17 stone and he looks like he could walk through walls.

"It is all about learning. We have got someone very special here and we can't make any mistakes.

"He has been out of the sport for some time. After the Olympics he was weighing up his position in the amateurs and the professionals.

"We have got a real chance in Anthony Joshua to have another heavyweight world champion from these shores."

Joshua won his first two professional bouts, beating Emanuele Leo in the first round on his debut and overcoming veteran Paul Butlin via a second-round stoppage.

"Anthony is a very special talent and I think people are really starting to get on this journey now," Hearn said.

"He is gradually stepping up but he is looking better and better. He has only had two fights but you saw the improvement in his second fight.

"In sparring he is fighting guys that are hugely advanced in their careers and world title challengers. He is the real deal and if you speak to people in the sport they will tell you so.

"He can't wait to get back there. It was a tremendous period for him, winning that gold at the Olympics.

"Dorian is someone I have seen a number of times. He is a tough guy and is at a decent level - a level just below British title level.

"If Anthony dispatches of him in style it won't be too long before he is challenging for titles himself."