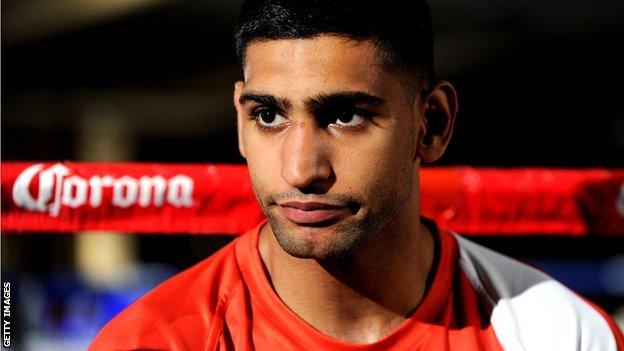 Khan, who missed training as a result, said he was parked in a car which was hit by another car, and had initially reported neck pain.

"He was a little shook up, but he's unharmed," Khan's camp told BBC Sport.

The ex-WBA and IBF light-welterweight champion is training in the United States with Virgil Hunter, although the Briton may not fight again in 2013.

"No sparring or gym today," Khan later told his followers on social media, "Virgil told me to rest."

Khan, 26, has won his last two fights - including defeating Mexican Julio Diaz in Sheffield in April - but lost both his world titles to Lamont Peterson in 2011 and suffered a knockout against Danny Garcia in Las Vegas 18 months ago.

He subsequently parted ways with trainer Freddie Roach, before joining Hunter's gym in Oakland in October 2012.

Khan was reported to have agreed to fight Devon Alexander before Christmas, but, with Alexander now targeting Shawn Porter, the Briton's camp is considering alternatives.

"[Promoters] Golden Boy are looking at a few different opponents for Amir," Khan's team told BBC Sport. "Hopefully soon we should have something in place and can then make an announcement."

Attention has turned to a possible high-profile clash with five-division world champion Floyd Mayweather, mooted for the spring of 2014.