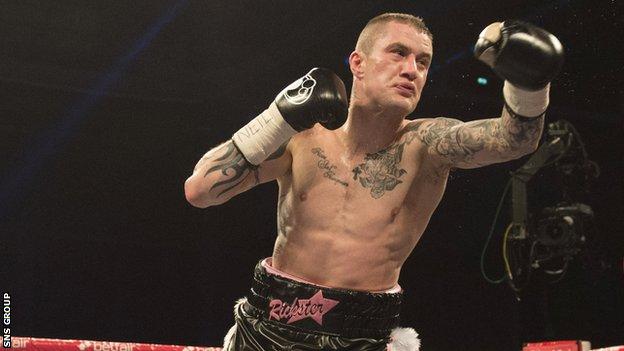 Plans for a February rematch between WBO lightweight champion Ricky Burns and Raymundo Beltran look to be off after the governing body ordered Burns to make a mandatory defence.

The WBO has told Burns's management to begin negotiations with mandatory challenger Terence Crawford of the USA.

The letter, dated 8 November, gives the Burns camp 30 days to arrange the bout.

However, unification fights with either Miguel Vazquez or Richar Abril remain possibilities for the Scot.

Burns retained his world title after a controversial draw with Beltran in September.

The 30-year-old champion suffered a broken jaw early in the fight, with the Mexican challenger's manager saying his fighter had been "robbed".

And promoter Eddie Hearn said he thought Beltran had done enough to win "a close fight".

Burns, who has resumed light training, spoke last month of his desire to take on Beltran again, with Hearn saying a deal for a rematch was "99% done".

"I think it's only right to fight Raymundo again," Burns told BBC Scotland. "I think it's the fight the fans want to see."

The much-hyped Crawford, 26, from Omaha, is unbeaten in 22 contests.

Burns could go after IBF champion Vazquez or bid to take Abril's WBA belt, but negotiations would need to be done quickly following the WBO's intervention.