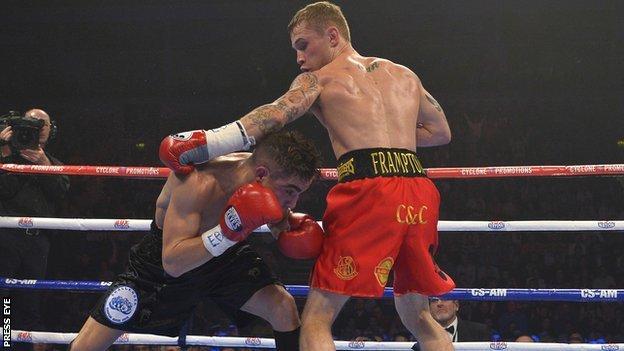 Carl Frampton has relinquished his European and Commonwealth super-bantamweight belts as he aims to secure a world title fight.

However Spaniard Martinez regrouped from that loss to win the IBF title in August when he knocked out Colombian Jonathan Romero.

Martinez, 28, is set to defend his IBF title against former world champion Jeffrey Mathebula in December and Frampton will hope to fight the winner in the first half of 2014.

However, Martinez's management have suggested that the Spaniard will first opt for another voluntary defence against a different opponent if he defeats South African Mathebula.

Frampton's manager Barry McGuigan confirmed that Frampton would be relinquishing the European and Commonwealth belts.

"Carl Frampton has represented both the Commonwealth Boxing Council and the European Boxing Union extremely well in his time as champion, which we are sure both Simon Block of the CBC and Enza Jacaponi of the EBU will attest to," said McGuigan.

Cuba's Guillermo Rigondeaux is the WBO and WBA 'super' champion and widely regarded as the world's best super-bantamweight.

England's Scott Quigg, often mooted as a future opponent for Frampton, is the WBA 'regular' champion and defends his title against Argentina's Diego Silva in Manchester on 23 November.