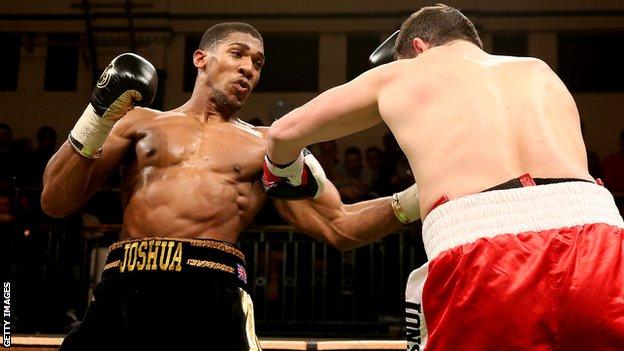 Olympic champion Anthony Joshua made it three wins out of three in his professional heavyweight career after a second round stoppage of Croatia's Hrvoje Kisicek in London's York Hall.

The English 24-year-old had easily won his opening two pro fights and started strongly against his opponent.

Joshua looked sharp from the start, picking his shots well.

He knocked down Kisicek midway through the second round and moments later the fight was stopped.

Joshua, who was watched on by former world heavyweight champion Larry Holmes, will be in action next weekend in Manchester as part of the undercard of the Carl Froch v George Groves super-middleweight world title fight before fighting former Welsh amateur champion Dorian Darch in London in December.

Gavern edged the contest by winning on two judges' cards, while the third judge called it as a draw.