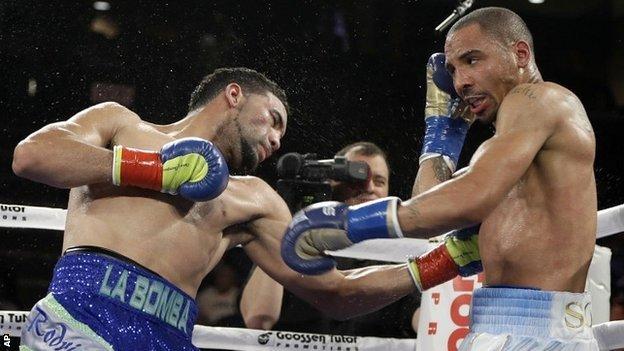 American Andre Ward stepped closer to a rematch with Britain's Carl Froch after beating Edwin Rodriguez on points in a non-title super-middleweight fight.

WBA champion Ward's title was not on the line after his Dominican opponent failed to make the weight.

IBF champion Froch lost to Ward in 2011 and is open to fighting in Las Vegas.

A shoulder muscle tear and surgery had kept Ward out of the ring for over a year, but he showed no ill effects in California as he dominated from the beginning and survived a fourth round bout of wrestling in which both fighters were deducted two points.

Undefeated Ward, who inflicted one of Froch's two professional defeats, took the first round despite Rodriguez running at him from the opening bell, trying to get inside and make things uncomfortable.

There was no sign of Ward being ring rusty despite his lay-off and his work-rate had his opponent well behind after the first three rounds.

After the spate of brawling caused referee Jack Reiss to intervene, 2004 Olympic light-heavyweight champion Ward responded to the warning with a big right hand to make it four rounds in a row.

He continued to land jabs and a massive left in the 10th round sealed a comfortable victory.

The Californian had not fought since a 10th-round stoppage of fellow American Chad Dawson in September 2012.

Nottingham fighter Froch, who holds the IBF super-middleweight belt, will defend both of his titles against London's George Groves in Manchester on 23 November.