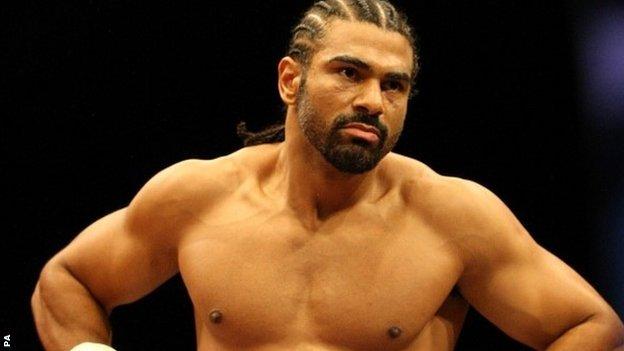 The 33-year-old Briton had a five-hour reconstruction operation on his right shoulder in Germany on Thursday.

"The boxing gods keep hinting that maybe enough is enough," said Haye, who has cancelled his 8 February bout with Tyson Fury.

"It is very rare for a British fighter to win a world title away from home but Haye did it twice.

"He was top class in the cruiserweight division. At heavyweight he faltered at the very highest level. But he got closer on points than any of Wladimir Klitschko's other challengers.

"He brought great excitement with his attitude and punching power and can be proud of the mark he has made on British boxing."

Haye announced his retirement in October 2011, three months after losing his WBA belt to Ukrainian Wladimir Klitscho in Germany, but he returned to the ring the following year.

"The surgery and subsequent results are a bitter pill to swallow because I truly felt I had a lot more to offer," Haye said.

"But I've been boxing for 23 years now, amateur and pro, and this has clearly taken its toll on my body.

"I genuinely believed the shoulder injury wasn't that bad. But the doctor sent me for a detailed MRI scan and within 24 hours I was told the full extent of the damage. Twenty-four hours after that I was in the operating theatre.

"I had big plans for next year and the ultimate goal was to win back the world heavyweight title.

"What I didn't anticipate was that this year would be the unluckiest of my career and that a number of injuries would disrupt my plans so much."

Earlier in his career, Haye became European cruiserweight champion and went on to win the WBC, WBO and WBA world titles before stepping up to heavyweight.

He beat WBA heavyweight champion Nikolay Valuev in Germany in November 2009 to become the first Briton to hold a world heavyweight crown since Lennox Lewis.

Haye's most recent fight was a knockout win over Dereck Chisora at Upton Park in London in July 2012, one of only two fights he has had since 2010.

His scheduled June fight with German Manuel Charr was cancelled when Haye sustained a hand injury.

He was originally due to fight Fury in Manchester in September but the bout was rearranged for February after Haye suffered a cut above his left eye in training.

Fury's uncle and trainer, Peter Fury, said he was not surprised by the news that February's fight had been cancelled.

"From the moment Haye postponed in September, it was obvious this fight wasn't going to happen," he told BBC Sport.

"The public have been duped. Tyson will fight someone else in February. We'll get the show back on the road and we're glad we don't have to do business with these people ever again."

Haye added: "If I'm now destined to have won the European Championship, the unified world cruiserweight championship and the WBA heavyweight championship of the world - with a record of 28 fights, 26 wins, 24 victories coming via knockout and only two defeats - then so be it.

"I'm proud of these achievements and consider my boxing career a huge success."