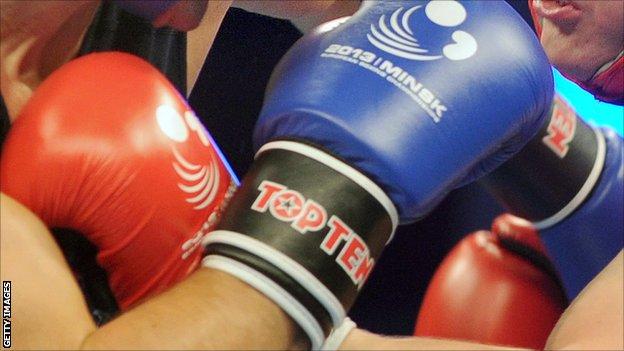 Southampton boxer Ryan Garner says he has his sights firmly set on breaking into Great Britain's development squad after winning gold at the European amateur junior championships in Russia.

The 54kg boxer now hopes to be invited to join GB's development squad in Sheffield when he turns 16 in January.

"It feels great to be honest," Garner told BBC Radio Solent of his victory.

"It feels great to have made everyone happy and my family proud.

"I was hoping I would win, I knew it would be hard. I was hoping for any medal but to get gold is even better."

Garner fought four times in six days and says he won gold by making it "rough and tough" and mixing it up close against his opponent.

Having won gold against boxers who were mainly a year older, he hopes he can continue his progress and make the breakthrough into the GB squad,

"Last year I boxed at the European school boys and lost in the first round, so I've come a long way," the Sholing Technology College student added.

"I've done it through sheer hard word, dedication and training.

"I'm aiming to carry on and go to international tournaments with England and win medals like this, and then hopefully get onto the GB development squad and go from there.

"I'm not currently old enough. I need to be 16 and above which I will be on 5 January.

"I was one of the youngest at this tournament, most were a year older, so that makes it an ever better achievement.

"My main ambition is to get into the development squad as that is how you get to box for GB at the Olympics.

"My coach is confident in me that I'm good enough to get into that squad."