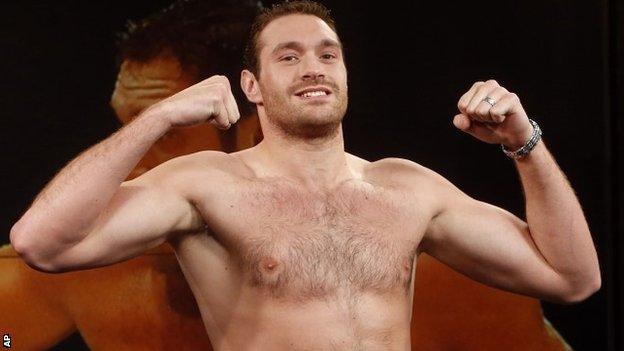 Tyson Fury is being lined up for a new fight in early 2014 after British rival David Haye pulled out of their planned heavyweight clash in Manchester.

Promoter Mick Hennessy said talks have started over a potential bout with unbeaten American Deontay Wilder, and other options were being explored.

Former world champion Haye withdrew from the February fight at the weekend after undergoing shoulder surgery.

Fury's Twitter claim to have retired has been discounted by his team.

"We have had talks with Wilder's people and we are in discussions at the moment, but obviously there are a lot of pieces of the jigsaw we need to fit together," said Hennessy.

"We are looking at a number of different options but one thing we do know is that Tyson is one of the biggest draws in world boxing at the moment and as soon as he is ready we will look to get him back in the ring."

Wilder, like Fury, is unbeaten in his professional career and has clocked up 30 consecutive knockouts, including a first-round defeat of British fighter Audley Harrison in April.

Fury, 25, has been an outspoken Twitter user and on Wednesday posted a message - retweeted more than 1,500 times - which began: "Hi every1 I have officially retired from boxing."

He later added: "Just to confirm I'm not in a bad mood or anything. I've retired 1000000% no matter what ill never fight again!"

The Manchester-born fighter, who is unbeaten in 21 professional fights, changed his profile to "ex boxer" but his uncle and trainer Peter Fury said he had not quit the sport and would "fight and win titles".

Hennessy admitted Fury was frustrated by a second big fight cancellation two months after their first bout was postponed when Haye sustained a cut above his eyebrow.

"Tyson needs time to get used to the situation because all these things - broken toes, cut eyes, shoulder injuries - are like a foreign language to him," said Hennessy.

He hopes Fury will be fit to return in February, with future developments around Vitali and Wladimir Klitschko likely to determine his next opponent, although 2008 Olympic bronze medallist Wilder remains favourite.