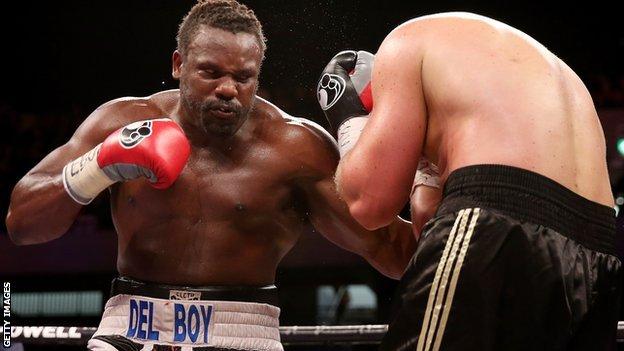 Dereck Chisora will defend his European heavyweight title against a replacement opponent next month after Andriy Rudenko broke down injured.

Chisora had been scheduled to fight the unbeaten Ukrainian at the Copper Box in London on 15 February, but Rudenko ruptured his Achilles in training.

The Briton's promoter Frank Warren says he is on the lookout for a new fighter.

"We're disappointed to hear Rudenko has suffered this serious injury and has to withdraw," Warren said.

"It's very unfortunate but these things happen and we have to move on and secure Chisora a new challenger.

"We have some names that we are working on and will look to announce the name very shortly."

Rudenko is unbeaten in 24 contests but has only fought once outside his homeland, while Chisora won all of his four fights in 2013.

Chisora won the vacant European crown with a fifth-round stoppage of Germany's Edmund Gerber at the Copper Box in September.

In his most recent fight in November, he stopped Czech Ondrej Pala in the third round at the same venue to defend his WBO International title and take the vacant WBA International belt.