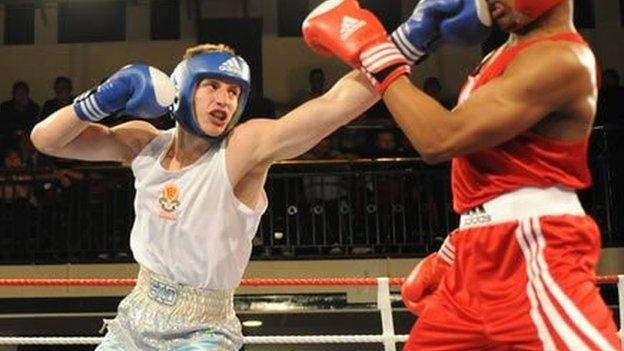 Steelworker Simon Barclay has said he expects to be in British title contention within two years after signing professional terms with promoter Frank Warren.

The 24-year-old from Corby is an Amateur Boxing Association champion at cruiserweight and heavyweight.

"My manager has got high hopes," Barclay, who has 38 wins from 52 amateur fights, told BBC Sport.

"He believes that in two years I can be looking at British title eliminators."

As well as being a double ABA champion, Barclay has Three Nations honours and has captained England.

"Corby's not known for sportsmen. I love the town, I'm Corby through and through. It would be good to win some titles for Corby

But a back injury hindered his chances of getting into the British team ahead of the London Olympics in 2012.

"I thought I had performed well enough but they didn't accept me. But they're the selectors and you can't do anything about it," said Barclay, who will fight at cruiserweight in the professional ranks.

"A couple of years ago I said I wouldn't even think about turning pro until I've boxed for England. I've captained England on one occasion, so I've achieved that goal."

"Seeing some of the things that have been said about me really gets you excited," Barclay added.

"It gives me confidence. I believe I can go all the way myself. But when you hear it from experienced people like Frank it gives you a boost."

Barclay, who will be managed by Jason McClory and trained by his amateur coach John Mulhero, hopes to make his debut in March, subject to a medical for his boxing licence.

He works in the only remaining steelworks in Corby, a town synonymous with the industry for 100 years.

"Corby's not known for sportsmen," he said.

"I love the town, I'm Corby through and through. It would be good to win some titles for Corby."