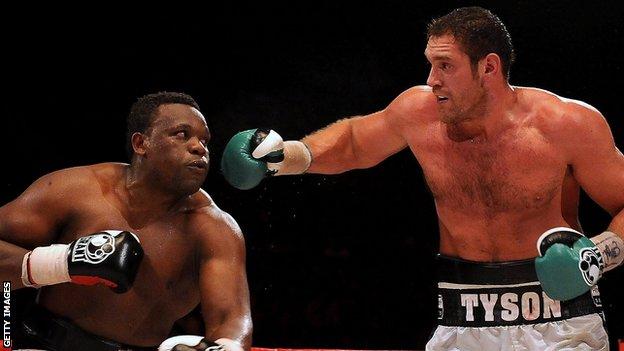 Plans are being made for an all-British heavyweight rematch between Dereck Chisora and Tyson Fury in the summer, according to promoter Frank Warren.

Fury beat Chisora on points in July 2011 but has since seen two consecutive bouts against David Haye fall through.

"The plan is for both of them to come through their fights [on 15 February], then the pair will meet in a massive rematch in June," said Warren.

The agreement has been denied by Fury's promoter Mick Hennessy.

Chisora, 30, will put his European heavyweight title on the line against undefeated Ukrainian Andriy Rudenko at the Copper Box in London in February, with Fury now looking likely to be part of the card with a view of setting up a "real summer extravaganza" between the pair.

"Because it's the biggest fight out there for them, and it's a fight that the public want to see, the only place for it to happen would be a football stadium - a real summer extravaganza between the big men of British boxing before the World Cup," Warren continued.

Any potential fight could have added importance with news of Vitali Klitschko vacating the WBC heavyweight title to focus on politics.

Warren added: "Chisora versus Fury is the biggest fight out there and it could certainly be a world title eliminator, but plans can be upset.

"Chisora has - by no means - an easy fight against a hard and undefeated Ukrainian in Rudenko who's knocked out 16 of 24 opponents."

Hennessy confirmed a verbal offer has been made to Fury, who recently resumed training in the south of France, but said it was some way from being signed.

"Until something is agreed in writing and signed into, myself, Peter Fury and Tyson are still keeping our options open," he stated.

Fury, 25, became the new British and Commonwealth heavyweight champion after a brutal fight with Chisora at Wembley Arena, and is still undefeated.