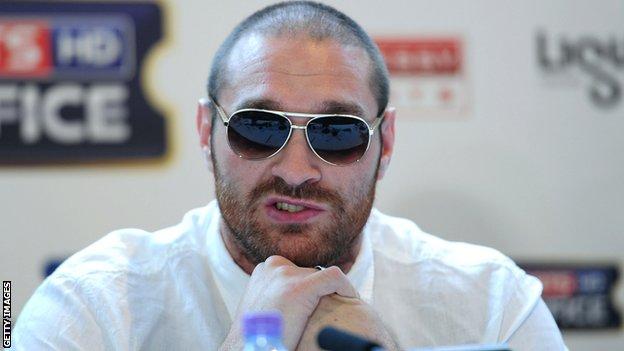 The fight is on the undercard of Dereck Chisora's European heavyweight title defence and will be Fury's first since his knockout win over Steve Cunningham in the United States last April.

"It's been a while, but I'm looking forward to getting in the ring again," said the 25-year-old from Manchester.

"I wouldn't say that rust has set in because I haven't fought."

Fury was scheduled to fight former WBA heavyweight champion David Haye last September but the fight was first postponed when Haye suffered a deep cut to his head in training, and then cancelled in November when the Londoner had shoulder surgery and said he had been advised to retire.

Fury said he wanted to show the world that he was "back in action and on course for the world title".

He said: I'm always training and in the gym sparring, but I'm now desperate to get in the ring in front of a big electric crowd and do what I was born and bred to do, fight and win."

Promoter Frank Warren has also suggested there could be a summer rematch between Fury and Chisora, provided both emerge victorious from their fights at the Copper Box. Chisora's opponent has yet to be named after scheduled opponent Andriy Rudenko of Ukraine withdrew with injury.

Fury, who is unbeaten in 21 fights and has 15 knockouts on his record, won on points the last time they fought in July 2011.

Basile, his opponent next month, is 6ft 6in, three inches shorter than Fury, but is a veteran of 70 fights with 23 championship title bouts in a career spanning nearly 10 years and is the IBF Latino champion.

But Fury is confident of extending his unbeaten run.

"He's just a few inches shorter than me, which is great because I've been fighting shorter men," he said.

"He'll be near my height and, once I work out the range and timing, those big right hands will be detonating on his jaw."