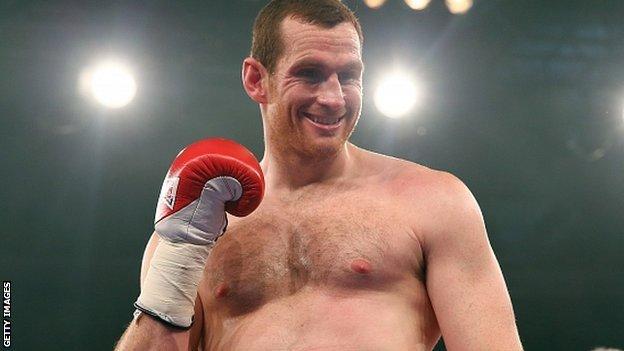 David Price returned to winning ways with a first-round knockout of Istvan Ruzsinszky in Stuttgart.

Liverpool heavyweight Price, 30, is rebuilding after back-to-back defeats by American Tony Thompson in 2013.

Ruzsinszky got up after being floored by a Price right hand two-thirds of the way through the round but the referee immediately waved the fight off.

Hungary's Ruzsinszky was a late replacement for Kazakhstan's Konstantin Airich, who failed a medical.

"I didn't get much time to show what I had but I can only beat what was put in front of me," said Price, who has 14 knockouts from 16 wins.

"But that's what I've got to do to an opponent like that, get him out of there early and move on to the next fight."

Former British and Commonwealth champion Price, who is now with German promoters Sauerland, was fighting on the undercard of the WBO cruiserweight title clash between Marco Huck and Firat Arslan.

Price, who was in his first professional fight outside of the United Kingdom, had been due to return to the ring against Russia's Evgeny Orlov in Germany on 14 December but pulled out of the fight because of a virus.