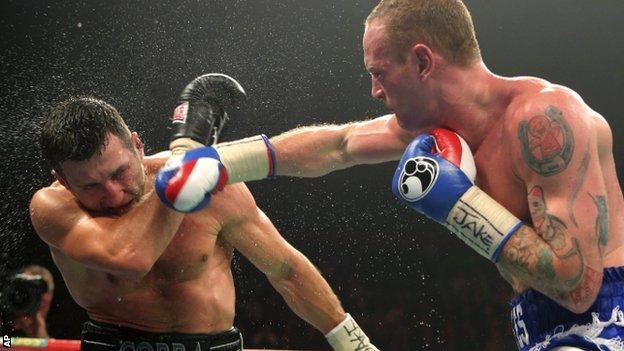 Super-middleweight champion Carl Froch must have a rematch with George Groves within 90 days or risk losing his belt.

Foster controversially stopped the fight in the ninth round, and the IBF's decision follows an appeal by Groves.

Earlier on Friday, the 25-year-old fighter turned down an "unsatisfactory" rematch offer from Froch.‏

After the IBF's decision, Groves tweeted: "Maybe I was right after all turning down that 'amazing' offer."

Nottingham fighter Froch beat Groves in Manchester on 23 November as Foster stopped the bout, but the decision was met with a negative response from sections of the crowd.

Afterwards, Groves insisted the contest had been ended too soon.

The IBF agreed, and said in a statement: "The panel determined that the referee gave appropriate warnings to both fighters but did not choose to deduct points.

"The panel felt that in the ninth round, Groves should have been allowed to continue as he did not appear to be seriously hurt - and was counter-punching and attempting to move the action away from the ropes at the time of the stoppage.

"In addition, the referee waved off the fight from behind Groves instead of in front of him and did not look into his eyes. Groves showed no signs of being hurt after the stoppage. In sum, the panel felt it was an improper stoppage."

IBF Championships chairman Lindsey E Tucker said Froch had 90 days to fight again and that if he failed to do so, he would "probably" lose his IBF title.

"George Groves has had a seven-figure offer from the Froch camp but he's waiting for a better offer.

"It's unlikely either fighter will take anyone else before a rematch - the money and the egos of the two men will bring them together.

"Eddie Hearn the promoter thinks it's a fight fit for a football stadium so a rematch promises to be a memorable night for British boxing."

"Groves thought the fight was stopped early. The panel, three members, listened to all the evidence and they decided a rematch was in order. I guess… they ordered the rematch after his complaint," Tucker told BBC Sport.

Froch won his IBF title with a fifth-round stoppage of Canada's Lucian Bute at the Capital FM Arena in Nottingham in May 2012.

Tucker added: "Both fighters were notified of the decision right away. We've heard responses from both parties but I'd rather not say what they said. They both acknowledge the decision."

If Froch were to lose his IBF title he would still be a World Boxing Association champion. But WBA rules allow there to be two champions in the same division, and American Andre Ward, who beat Froch in 2011, is the organisation's so-called 'super' champion.

The 36-year-old said on Friday morning he would aim to arrange a fight with Mexico's Julio Cesar Chavez Jnr after revealing Groves had rejected a "seven-figure" offer for a rematch.

But Groves then insisted negotiations were ongoing and that he was waiting for the outcome of the IBF's decision on his appeal.