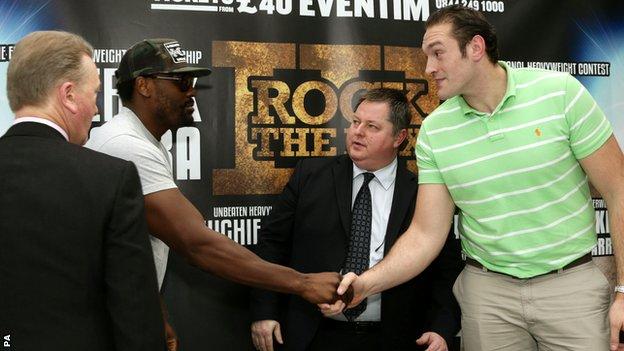 Tyson Fury and Dereck Chisora could fight each other again in June in a WBO title eliminator, according to Chisora's promoter Frank Warren.

The British heavyweight duo are on the same bill at the Copper Box in east London on 15 February.

The pair first met in July 2011 at Wembley Arena, with Fury prevailing on points after a brutal encounter.

Fury is ranked seventh in the world by the WBO, while Chisora is reigning European heavyweight champion.

"They're the two best heavyweights in Europe, maybe the world, except for [reigning WBA, IBF and WBO champion] Wladimir Klitschko," said Warren.

"I'm quite sure I can get a final eliminator for the WBO between Dereck and Tyson."

The proposed venue for a June fight is West Ham's ground Upton Park, the scene of Chisora's fifth-round knockout by David Haye in July 2012.