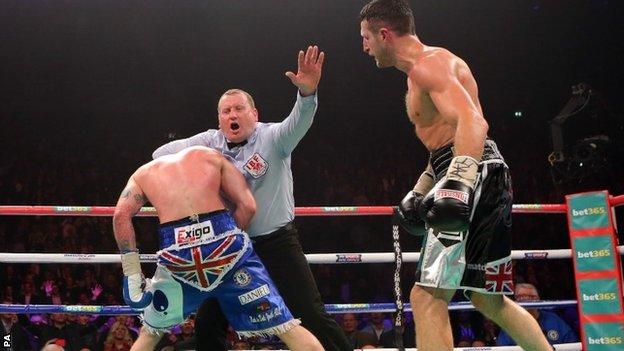 George Groves has called for his world title defeat by Carl Froch to be deemed "no contest", claiming the referee was wrong to end the fight when he did.

The International Boxing Federation has since ordered a rematch, citing "inappropriate conduct" by Foster.

"I have written to the British Boxing Board of Control for the Froch fight to be deemed a no contest," Groves said.

The 25-year-old Londoner, writing on Twitter, added that the result should be changed because of Foster's "incorrect" decision.

Groves floored Froch in round one of their November fight in Manchester and was ahead on all three scorecards when the bout was stopped.

In its decision to order a rematch last month, the IBF said Groves should have been allowed to continue "as he did not appear to be seriously hurt" and was "counter-punching and attempting to move the action away from the ropes" when the referee intervened.

The Froch and Groves camps have been in discussions over a rematch in May, with Arsenal's Emirates Stadium and Nottingham Forest's City Ground touted as possible venues, no deal has yet been agreed.

Groves turned down an offer that Froch's camp claimed would have earned him more than £1m, saying that the conditions attached to the proposal were "unsatisfactory".

Froch is obliged to face Groves next, but may choose to forfeit his IBF crown in favour of a meeting with either Andre Ward or Julio Cesar Chavez Jr in the United States.