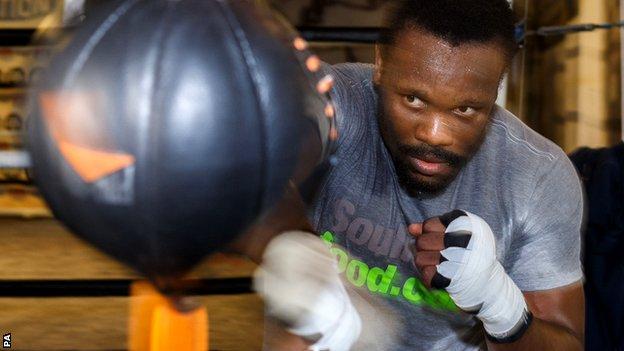 Dereck Chisora has pledged to turn his attention to fellow British heavyweight Tyson Fury, should he overcome American Kevin Johnson on Saturday.

The WBO and WBA intercontinental champion, 30, tops the bill at the Copper Box in east London, while Fury faces Joey Abell on the undercard.

American Abell is a late replacement for the unfit Gonzalo Omar Basile.

"[I want to] send a big message to Fury and the rest of the heavyweights out there," said Chisora.

Fury and Chisora first met in in July 2011, with the less experienced Fury prevailing on points. Last month, it was suggested a rematch between the pair could happen as early as June.

But first Chisora must dispense with Johnson, 34, who has lost three of his last four fights, including a sluggish defeat against Fury in Belfast in December 2012.

However, the New Jersey fighter has never been stopped in his 34-fight career and Chisora is expecting a difficult contest.

"The focus is on Johnson for this fight. [But] Fury will be there in the background and he's next."