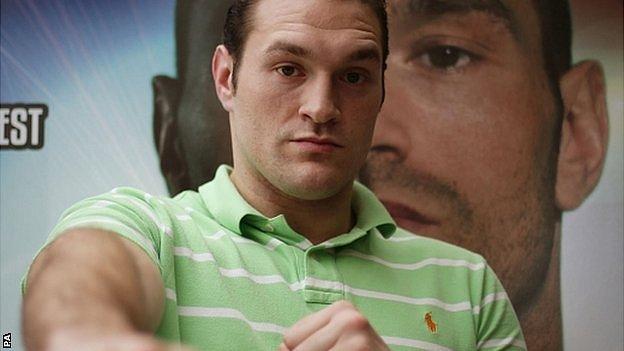 At least Tyson Fury is honest. Searingly so. About his mood swings, his attitudes to women, his Traveller heritage, his public persona, his religious beliefs. In fact, you can ask Fury pretty much anything and he will furnish you with a reply.

As the recent sackings of Kevin Pietersen and Michael Laudrup reminded us, modern sport is characterised by evasiveness, insincerity and suspicion on all sides. And try getting anything vaguely interesting out of a Premier League footballer nowadays. Assuming they can spare two minutes of their time.

I think Fury is joking. Sometimes it is hard to tell. For example, he sounds genuinely amazed when he describes all the cooking and washing he has to do in training camp, as if he has stumbled upon unequivocal proof of womankind's true calling.

My wife gets treated right and she thinks I'm a nice person. I'm not a woman, but to be married to a handsome man like me - a stallion - must be a good feeling

"These women, they really do deserve a lot of respect," he says. "I had to sack myself from doing the washing, I couldn't keep on top of it."

On Saturday, Manchester heavyweight Fury fights for the first time in 10 months, against unheralded American Joey Abell at the Copper Box Arena in London. Victory for Fury, who is unbeaten in 21 professional fights, would set up a rematch with Dereck Chisora and put him on the verge of a world title shot.

With Vitali Klitschko having swapped boxing for politics and younger brother Wladimir getting on in years, Fury believes this is his moment. And not before time.

Since Fury's last encounter, a seventh-round knockout of Steve Cunningham in New York last April, life has been muddled and maddening, not to mention hard on the pocket.

The 25-year-old was supposed to have fought fellow Briton David Haye last September, only for the former world champion to pull out a week before the bout with a cut eye. The bout was rescheduled for February, only for Haye to announce his retirement last November, citing a shoulder injury.

In the wake of Haye's announcement, Fury took to the internet to declare himself done with boxing. But so it is with Fury, who has a relationship with his Twitter account such as others have with their psychotherapist.

Sometimes foul-mouthed, sometimes sick, sometimes Biblical, Fury's Twitter timeline reads like the outpourings of an extremely turbulent priest. Which is why some might find it worrying that Fury rejects the suggestion his Twitter voice is merely a persona.

"You'll just get me in different moods," says Fury, who was fined £3,000 by the British Boxing Board of Control last March for an online attack on Liverpool heavyweight David Price. "You might see a flashy, arrogant person, you might see someone who can't be bothered living any more.

"Doing controversial things in life is what you'll be remembered for, not for how kind or how nice you were. People think of Mike Tyson and they don't think 'youngest heavyweight world champion ever', they think of him raping someone, biting someone's ear off, being the baddest man on the planet.

"People want to listen to what I say, whether it's rubbish or facts. And not everyone is as gifted as me in being able to talk rubbish. Anybody can be Mr Boring and sit in the corner and be nice and quiet. But that ain't me. If I'm going somewhere, I'm going to be the life and soul of the place.

"I'm an all-action man in anything I do. If I'm drinking, I'm drinking until I can't stand up any more. If I'm going out for Chinese, I'm going to an all-you-can-eat Chinese. If I'm eating cake, I'm eating the whole cake. I don't know what you'd call me - an idiot, maybe?"

Fury's detractors - and they are legion - call him far worse. Usually hiding behind online pseudonyms, tough guys that they are. But it is often difficult to defend him, especially when he resorts to homophobia and casual death threats.

But it is not unreasonable to point out that he receives some sickening abuse relating to his gypsy roots, of which he is immensely proud.

"We come from fighting backgrounds," says Peter Fury, Tyson's uncle and trainer. "So he's got to fight fire with fire. When you insult a young fighter, what do you expect?

"He's a nice, placid lad who never loses his temper. Anybody who's nice to Tyson, he's nice to them back. You've got a young man here trying to do his best. These people on Twitter giving him all this abuse, where are they in life?"

Tyson comes from a long line of fighting Furys, most of whom scrapped without gloves in fields and fairground booths. His father, 'Gypsy' John, made the transition from bareknuckle boxer to the licensed ranks, losing an eliminator for the British heavyweight title to Henry Akinwande in 1991.

"Boxing is a key element of the travelling culture," says the younger Fury, whose father was handed a long jail sentence in 2011 after causing a man to lose an eye in a brawl. "Before anything else, you learn how to fight.

"Whereas in other cultures little kids will kick a ball about, we're punching hands. When we have a dispute we're not supposed to go to the police, we're supposed take our shirts off, go outside and sort it out with fisticuffs. To be a good fighting man is one of the best things you can ever be in life.

"But you go outside now and people are pulling swords out. You've got little men wanting to be big men but they can't, so they pull out a gun and let five bullets go instead."

It isn't only the passing of more manly traditions that Fury laments. The portrayal of the traveller community in the mainstream media, with its obsessive and exploitative focus on 'big fat' celebrations, also gets his blood up.

"You wouldn't have 'big fat Pakistani weddings' or 'big fat black weddings'," says Fury, who currently resides in a house in Morecambe, Lancashire.

"It's discrimination and it's very offensive. There are idiots out there like the people on those programmes but you can find the good and bad in all walks of life. If you go to Wythenshawe, where I was brought up, it's not like that."

Fury, a born again Christian, can descend deep, as when discussing his religion. "I'd like to think that God is going to forgive me for everything," he says. "But you wake up in the morning and there is sin everywhere. It's a hard road to walk but God gives me the strength every day to batter the devil."

But a few minutes later Fury is singing sweetly on request - he fancies himself as a crooner - while rocking back and forth in his chair and smiling sheepishly. More proof that this 6ft 9in beast of a man is every bit as complicated as he says he is.

"I fight to provide a better life for myself and my family," says Fury, who has two children with his wife Paris, a daughter Venezuela and son Prince John James. "I'm not interested in being a role model for anybody else. Every man has his own life to live and every man should take his own path.

"You can never tell what I'm thinking. My wife never knows what we're doing next. She gives me stick because she knows if I go out on a Friday night I'm coming home at seven in the morning.

"I'm probably a hard person to live with but it's like it or lump it. She gets treated right and she thinks I'm a nice person. I'm not a woman, but to be married to a handsome man like me - a stallion - must be a good feeling."

You can never tell what Fury is thinking but at least he tells you if you ask. Those boys in suits at our governing bodies and football clubs could learn a thing or two.