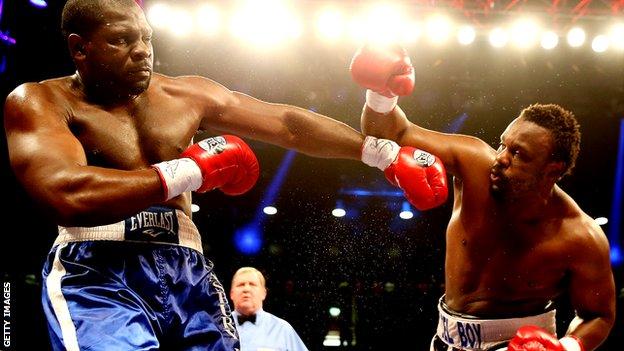 British heavyweights Dereck Chisora and Tyson Fury moved closer to a rematch after both secured wins in east London.

Chisora, 30, won a unanimous points decision in a gritty 12-round contest against veteran American Kevin Johnson.

In contrast, 25-year-old Fury provided a demonstration of his power, flooring southpaw Joey Abell four times before the fight was stopped in the fourth.

The pair first fought in 2011 with Fury prevailing, and with both victorious on Saturday a rematch seems likely.

"I want to fight [Russian heavyweight] Alexander Povetkin in Moscow, then in the summer me and Tyson should get it on," Chisora said after his victory.

Topping the bill at the Copper Box Arena, which was used for handball at the London 2012 Olympics, Chisora entered the ring in good form having won four successive contests, the most recent against Ondrej Pala in November.

But the defence of his WBO and WBA International titles against the hardy Johnson, a veteran of a 2009 defeat by Vitali Klitschko and a Fury loss in Belfast in December 2012, took time to come to the boil.

After four cagey rounds, European champion Chisora floored his opponent with a thunderous overhand right in the fifth, but Johnson saw out the remaining 40 seconds to the bell.

And 34-year-old Johnson's experience carried him through the full 12 rounds, as he wore down and evaded the younger Chisora.

Earlier, Fury claimed a fourth-round knockout win over Joey Abell in his first fight in 10 months.

Despite taking some punishment from the 32-year-old American, Fury knocked his opponent down in the third round.

Showboating throughout, the Mancunian then forced Abell down twice more in the fourth before the referee waved off the contest.

Two planned fights against British heavyweight David Haye were cancelled in 2013 and Fury's appearance in east London on Saturday was only his second fight in a year.

On the undercard, Bradley Skeete claimed the vacant WBA intercontinental welterweight belt by dismantling French fighter Christophe Sebire over 12 rounds - the unanimous decision from the judges 120-108, 119-109, 117-111.

Frank Buglioni's defence of his WBO European super-middleweight title against Naples veteran Gaetano Nespro was a livelier affair, with the Italian down in the fourth then twice in the fifth before the contest was waved off.

Hughie Fury, cousin of Tyson, improved his record to 13 wins in 13 contests, eight by way of knockout. The 19-year-old heavyweight, boxing at over 17 stone, had American Matthew Greer down three times in the second round before the towel was thrown in.

And Steve Collins Jnr, 23-year-old son of Irish super-middleweight legend Collins Snr, bloodied the nose of Somerset's Tommy Gifford in the first round but failed to capitalise, eventually drawing the contest 38-38 on the referee's scorecard.