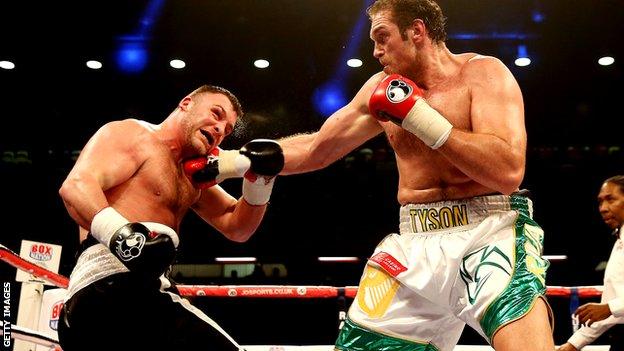 Tyson Fury has called fellow British heavyweight Dereck Chisora "useless", "one-paced" and "a bum" ahead of a likely rematch between the pair.

Fury beat Joey Abell on the same bill as Chisora, whom he defeated in 2011.

"I beat Chisora comfortably three years ago," said Fury. "He is a bum compared to me - I want [WBA, IBF, WBO and IBO champion] Wladimir Klitschko."

Manchester's Fury, 25, saw off 30-year-old Zimbabwe-born Chisora via a unanimous decision over 12 rounds in July 2011, and has since improved his professional record to 22 wins in 22 contests, 16 by knockout.

"Chisora is one-paced - left-hook then right-hand swing. He's useless," Fury told Box Nation. "I bring the action, every time I come to fight.

"I'm the best heavyweight on the planet. Bring them all on, I don't care."

European champion Chisora won convincingly on points over 12 rounds against experienced American Johnson at the Copper Box Arena to retain his WBO and WBA International titles.

He has suffered four defeats in his professional career, including a loss to Wladmir's brother Vitali in Germany two years ago and a fifth-round knockout by David Haye in July 2012.

But after his hard-fought London victory on Saturday, Chisora too seemed focused on a summer rematch with Fury.

"I want to fight [Russian heavyweight] Alexander Povetkin in Moscow, then in the summer me and Tyson should get it on," he said.

"I tried to be tactical but Kevin Johnson covered very well. Credit to the guy. I knew this was going to be a long night - I tried to go for the knockout but didn't get it."

Frank Warren, who staged the event at the Copper Box Arena and promotes Chisora, added that talks regarding a rematch would commence in the next few days.

"We're sitting down next week to decide where we go and obviously we want the big one," he said. "Let's see what happens."

Peter Fury, Fury's uncle and trainer, added: "We need to look for the right opponent for the spring to prepare Tyson for Chisora in the summer. And he will take Chisora in that fight, I'm sure of that."