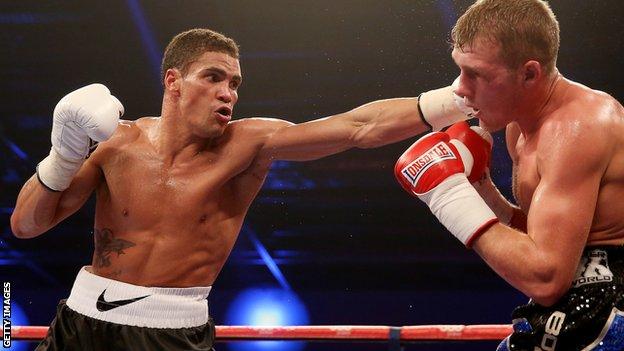 Olympic bronze medallist Anthony Ogogo says he is desperate to improve the quality of his professional opponents, but is happy to be patient.

"As an amateur, I boxed the best in the world. When I went to bed I was so excited to face them I couldn't sleep," he told BBC Sport.

"I want to get out of this learning phase and get back to people who are giving me sleepless nights."

Britain's Ogogo, who finished third at the London 2012 Games, has won two of his four bouts by knockout since turning professional and has been extended to the full six rounds on the two other occasions.

The Lowestoft boxer has aspirations of becoming a world champion, but will first of all target the British title.

And he hopes facing 22-year-old O'Neill (3-1-0) in front of the television cameras on the undercard of Ricky Burns against Terence Crawford in Glasgow will speed up that process.

"I feel like in six months' time I will be ready for those big, 12-round fights. I'm not in a rush but I want to test myself," he said.

"I'm ready to fight good people. No disrespect to Greg O'Neill, he's a good fighter. But if it were up to me I would be fighting these guys next Saturday.

"If it goes the six rounds then great. The main thing is I will be a better boxer at the end of the night.

"That will hold me in good stead for even bigger fights and matches."

Ogogo is signed to 10-time world champion Oscar De La Hoya's Golden Boy Promotions stable, but will fight in Scotland as part of a link-up with Eddie Hearn's Matchroom Sport.

"My promoters and management invest a lot of time in me and they need to bring me through at the right pace," he added.

"David Haye was on a 10-fight winning streak and everybody wrote Carl Thompson off and Thompson knocked him out.

"We've seen those mistakes happen. It's up to me and my management to make sure I don't fall the same way. I believe in my boxing ability."