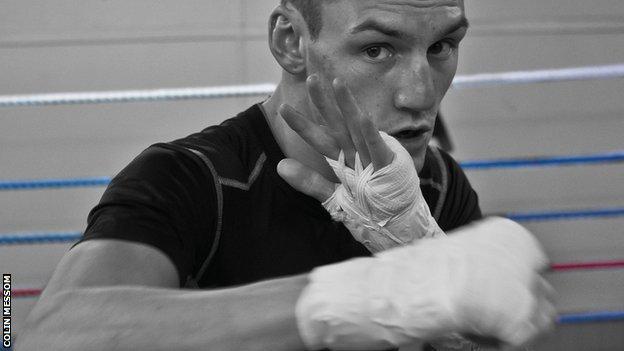 Leigh Wood says he could beat Gavin McDonnell in Saturday's British super-bantamweight title fight even if his opponent "had six arms".

"He is the favourite but that will make it even sweeter when victory comes," Wood, 25, told BBC Radio Nottingham prior to their fight in Hull.

"There is nothing he can do that I am not prepared for. He could turn up with six arms and I will still beat him."

Both fighters are unbeaten in 11 contests, but Wood is in no doubt he will cause a shock when they meet for the vacant British title at the Hull Ice Arena.

To do what Carl [Froch] has would be a dream. He is one of the best British boxers of all time. But I have my own goals and it all starts on Saturday night

Wood, from Gedling, added: "The fight is such a big occasion. It's my first fight on television and my first fight against an undefeated fighter, so there are a lot of pressures involved.

"But I will relish everything and suck it up and this will definitely be the best performance from me."

McDonnell is the twin brother of former world bantamweight champion Jamie, but Wood, who was schooled at the Phoenix Amateur Boxing Club in Nottingham where Carl Froch also boxed, insisted he was unfazed by the family connection.

"He is not as good as his brother, but even if it was his brother I would not have any problems fighting him," he said.

"He can be quite negative. He is quite tight and can run behind his jab. I am not really worried, but I am not underestimating him either."

Meanwhile, Wood was quick to praise Froch's achievements, but said he was more concerned with building his own reputation.

"To do what he Carl has would be a dream. He has done fantastic and is one of the best British boxers of all time," Wood said.

"But I have my own goals and it all starts on Saturday night. He has done his own thing and I am going to do my own thing."