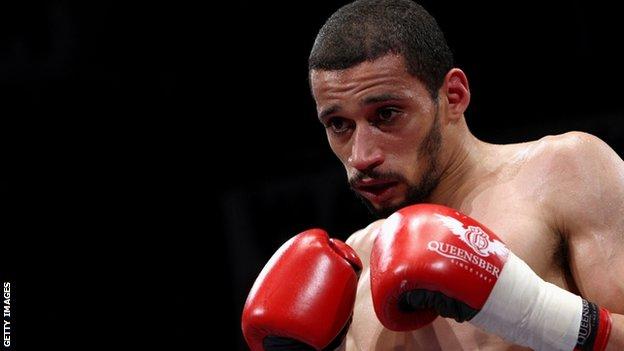 "I want to bow out as a champion," Woodhouse, who manages non-league football side Goole, told Sky Sports.

Hull fighter Campbell, 26, who took bantamweight gold at London 2012, has now won his five professional bouts after stopping Moises in the eighth and final round.

Home favourite Woodhouse, who quit full-time football in 2006 to become a fighter, went into his bout as an underdog against Bristol-born Hamilton.

But, in a close contest, Woodhouse grew in belief as his jab caused the defending champion, who was bidding for a third successful title defence, problems.

Woodhouse improved his record to 22 wins from 28 fights as he lifted the Lonsdale belt.

"There is a rumour going around that I had a £5,000 bet on myself to win the British title at 50-1," said Woodhouse. "I can neither confirm or deny these rumours but the drinks are on me.

"I have fought some really good guys but that was the hardest fight of my life."

Also on the card in Hull, Gavin McDonnell won the British super-bantamweight title with a sixth-round stoppage of Leigh Wood.

McDonnell, 27, was trailing on the scorecards but turned the fight in his favour with a sixth-round onslaught that forced the referee to intervene.

Both fighters were unbeaten in 11 contests, but McDonnell followed in the footsteps of his twin brother Jamie, a former British champion, to win the vacant title.

The 29-year-old won a unanimous decision and hopes the win will lead him to a bout against the victor of Jon Lewis-Dickinson and Neil Dawson's British title fight in March.