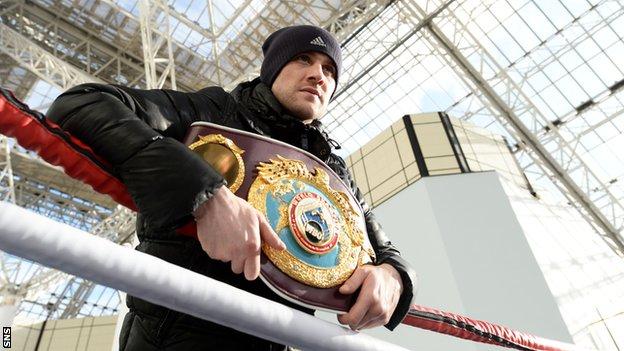 Ricky Burns insists he has no concerns over his jaw ahead of Saturday's WBO world lightweight title defence against Terence Crawford.

The Coatbridge boxer has not fought since breaking his jaw in a draw with Raymundo Beltran in September.

But the 30-year-old is in confident mood ahead of his fifth title defence at Glasgow's SECC.

"My jaw's been holding up as well. I've taken a few knocks and it seems to be holding up," Burns said.

"Fingers crossed [my jaw] holds up on fight night and there's no accidents.

"Crawford is a very slick boxer; he switch-hits and he's very good both orthodox and southpaw.

"We tried to get Jose Gonzalez, who I boxed before, over for sparring. He would have been ideal but sadly we couldn't get that to work,

"But we know what we're expecting and we've had plenty of variety in sparring."

Prior to the controversial draw with Beltran, Burns had an unconvincing win over Puerto Rico's Jose Gonzalez in May.