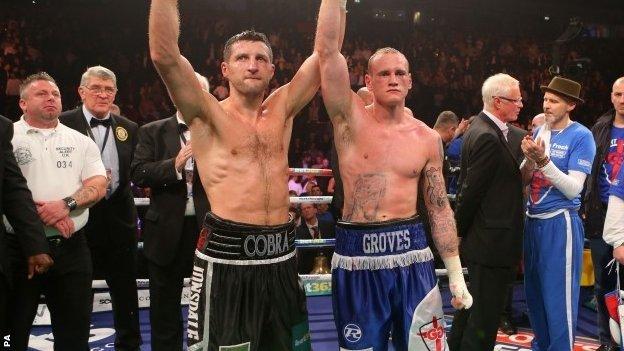 Carl Froch says Nottingham's City Ground is the most likely venue for his rematch with George Groves - but his opponent thinks otherwise.

Nottingham's Froch, 36, retained his WBA and IBF titles with a ninth-round stoppage of Groves last November.

Groves responded: "Before you all book your trains to Nottingham because the Sheriff has tweeted - I very much doubt King John would send us all there!"

Manchester United's Old Trafford and Arsenal's Emirates Stadium were thought to be the top contenders for the super-middleweight fight on 31 May.

Many observers, including BBC boxing commentator Mike Costello, consider the bout to be the biggest rematch in British boxing since Chris Eubank fought Nigel Benn for a second time at Old Trafford in 1993.

Froch-Groves II is expected to break the box-office record for a British fight.

There were bitter recriminations in the wake of the first contest between Froch and Groves at the Manchester Arena.

The International Boxing Federation ruled in January that Foster had acted inappropriately, and ordered Froch to have a rematch with Groves within 90 days or risk losing his IBF belt.