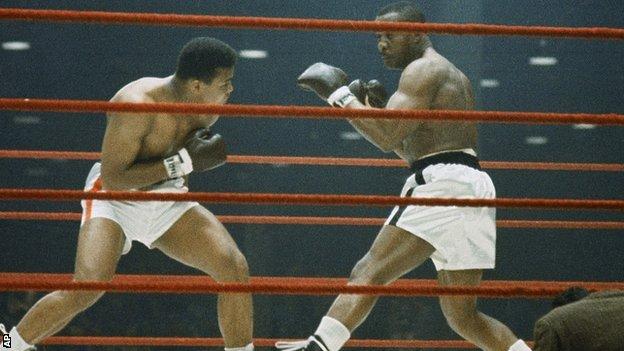 Muhammad Ali's first world title win over Sonny Liston was the subject of a match-fixing investigation by the FBI.

Liston, who was a heavy favourite to win, retired after the seventh round as Ali - then known as Cassius Clay - became world champion at 22.

Fifty years on, it has emerged that the FBI - led by director John Edgar Hoover - suspected Las Vegas gambler Ash Resnick of fixing the bout in Miami, Florida.

No conclusive evidence was found.

Ali, an Olympic champion and undefeated in 19 fights before meeting Liston, leapt from his stool proclaiming "I'm king of the world" when his opponent failed to come out for round eight.

It was only Liston's second loss in 37 matches and, while he said a shoulder injury prompted the retirement, there was instant suspicion over the fight's outcome.

FBI memos, since obtained by the Washington Times, were deemed so sensitive at the time that they were addressed directly to Edgar Hoover.

One memo, dated 24 May 1966, outlined an interview with Houston gambler Barnett Magids, who believed Liston would win.

But he spoke to his friend Resnick on the day of the fight and was told not to bet on the champion.

"At about noon on the day of the fight, (Magids) reached Resnick again by phone," the memo read.

"At this time, Resnick said for him to not make any bets, but just go watch the fight on pay TV and he would know why and that he could not talk further at that time.

"Magids did go see the fight on TV and immediately realised that Resnick knew that Liston was going to lose.

"Later, people 'in the know' in Las Vegas told Magids that Resnick and Liston both reportedly made over one million dollars betting against Liston on the fight."

The suspicions were never corroborated and the bout was later named the fourth-greatest sports moment of the 20th Century by Sports Illustrated.

Ali won the rematch in 1965 and went on to become arguably the greatest sportsman in history.

Liston, who never held the world title again after losing to Ali, died in 1970. Both Magids and Resnick are also dead.