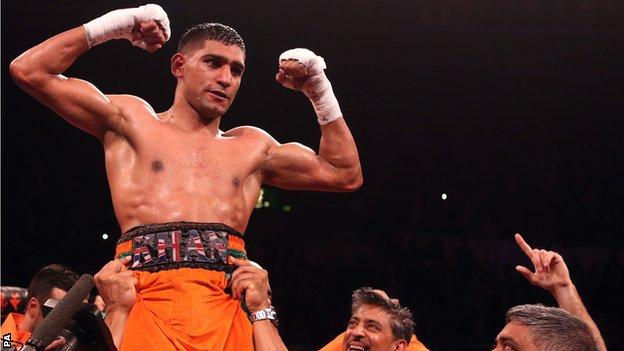 Amir Khan has accused Floyd Mayweather of taking the easy option in choosing to fight Marcos Maidana on 3 May.

Khan won an online vote after Mayweather, 36, asked fans to decide who he should fight, but the American chose Argentina's WBA champion Maidana.

Khan, who has won 28 and lost three of his 31 career fights, thought the fight with the WBC welterweight world champion was a done deal and says he turned down a match with IBF champion Devon Alexander in December.

"I'm upset about the fight not happening," Khan, 27, told BBC Radio 5 live. "I know there are a lot of fans throughout the world who wanted to see the fight.

"It's a setback for me because it's a fight I've been looking at for the last couple of months.

"I even called off the fight against Devon Alexander which was for the world title last December. I pulled out of that fight because I thought I had the Floyd Mayweather fight 100%.

"Contracts were sent to Floyd and his team. We had signed contracts so I thought back in December it was going to be announced, maybe in January or February, that I was going to fight Floyd Mayweather.

"Then I find out he wanted to do a poll to let his fans pick who he should fight. I won the poll by 57% and then he goes the opposite way and picks Maidana

"Maidana beat [Adrien] Broner but everyone knows it's a fight that Mayweather is going to walk through.

British welterweight Kell Brook has been suggested as a potential opponent, but Khan said: "He has to up his game a little bit to get that fight.

"In America no-one really knows Kell and the biggest boxing market is in America. In the UK it would be a huge fight but at the moment he is not on my radar."

Maidana has a professional record of 35 victories and three defeats - the last of which was against Devon Alexander in 2012.