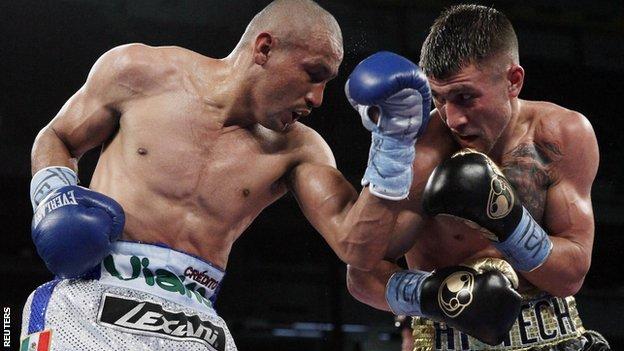 Vasyl Lomachenko's attempt to claim the WBO featherweight title in only his second professional bout ended with defeat by Mexican Orlando Salido.

The 26-year-old Ukrainian, who claimed Olympic gold at both the 2008 Beijing and London 2012 Games, beat another Mexican figher, Jose Ramirez, on his professional debut in October.

But he lost a split points decision against Salido, 33, in San Antonio.

Salido did not make the weight for the fight, so the title will become vacant.

He had already stated the bout would be his last as a featherweight.

Lomachenko was widely regarded as the best amateur boxer of all time, having built an alleged 396-1 record.

He went into the Salido fight in confident mood.