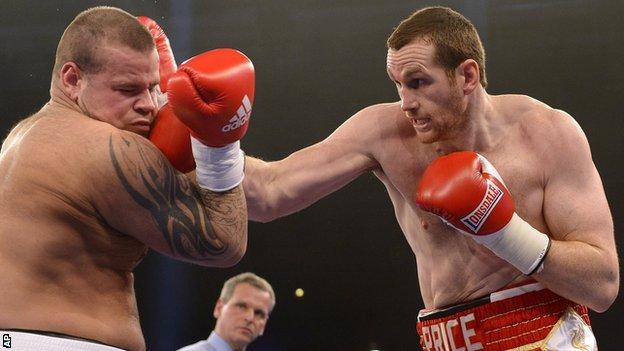 British heavyweight David Price's next fight will be against Ondrej Pala of the Czech Republic.

The pair will meet in an eight-round contest in Berlin on 29 March.

Pala, 29, who has 22 knockouts from 32 wins, was beaten by Dereck Chisora in his last outing.

''This is exactly the type of fight I need,'' said Price, 30. ''Pala is a guy who isn't afraid to come forward and trade. We saw this when he fought Chisora."

The Liverpool fighter, who has won 16 and lost two of his fights, added: "Although Dereck got the stoppage, Pala was holding his own and I don't think he was ever in any real trouble, he just got spun into the corner and the fight was waved off."

Price, who defeated Hungary's Istvan Ruzsinszky in January, is aiming to get his career back on track following two defeats at the hands of American Tony Thompson in 2013.

''This is the next step in the rebuilding process for Pricey,'' said promoter Kalle Sauerland. ''Pala has a lot of experience and, as his knockout record suggests, he can punch. This will be a good test for David and it should give us some indication of the progress he has made so far this year.''